Context. Protoplanetary disks are thought to evolve viscously, where the disk mass - the reservoir available for planet formation - decreases over time as material is accreted onto the central star over a viscous timescale. Observations have shown a correlation between disk mass and the stellar mass accretion rate, as expected from viscous theory. However, this happens only when using the dust mass as a proxy of the disk mass; the gas mass inferred from CO isotopolog line fluxes, which should be a more direct measurement, shows no correlation with the stellar mass accretion rate.
Aims: We investigate how 13CO and C18O J = 3−2 line fluxes, commonly used as gas mass tracers, change over time in a viscously evolving disk and use them together with gas disk sizes to provide diagnostics of viscous evolution. In addition, we aim to determine if the chemical conversion of CO through grain-surface chemistry combined with viscous evolution can explain the CO isotopolog observations of disks in Lupus.
Methods: We ran a series of thermochemical DALI models of viscously evolving disks, where the initial disk mass is derived from observed stellar mass accretion rates.
Results: While the disk mass, Mdisk, decreases over time, the 13CO and C18O J = 3−2 line fluxes instead increase over time due to their optically thick emitting regions growing in size as the disk expands viscously. The C18O 3-2 emission is optically thin throughout the disk for only for a subset of our models (M*≤ 0.2 M⊙ and αvisc ≥ 10−3, corresponding to Mdisk(t = 1 Myr) ≤ 10−3 M⊙). For these disks the integrated C18O flux decreases with time, similar to the disk mass. Observed 13CO and C18O 3-2 fluxes of the most massive disks (Mdisk ≳ 5 × 10−3 M⊙) in Lupus can be reproduced to within a factor of ~2 with viscously evolving disks in which CO is converted into other species through grain-surface chemistry with a moderate cosmic-ray ionization rate of ζcr ~ 10−17 s−1. The C18O 3-2 fluxes for the bulk of the disks in Lupus (with Mdisk ≲ 5 × 10−3 M⊙) can be reproduced to within a factor of ~2 by increasing ζcr to ~ 5 × 10−17−10−16 s−1, although explaining the stacked upper limits requires a lower average abundance than our models can produce. In addition, increasing ζcr cannot explain the observed 13CO fluxes for lower mass disks, which are more than an order of magnitude fainter than what is predicted. In our models the optically thick 13CO emission originates from a layer higher up in the disk (z∕r ~ 0.25−0.4) where photodissociation stops the conversion of CO into other species. Reconciling the 13CO fluxes of viscously evolving disks with the observations requires either efficient vertical mixing or low mass disks (Mdust ≲ 3 × 10−5 M⊙) being much thinner and/or smaller than their more massive counterparts.
Conclusions: The 13CO model flux predominantly traces the disk size, but the C18O model flux traces the disk mass of our viscously evolving disk models if chemical conversion of CO is included. The discrepancy between the CO isotopolog line fluxes of viscously evolving disk models and the observations suggests that CO is efficiently vertically mixed or that low mass disks are smaller and/or colder than previously assumed. 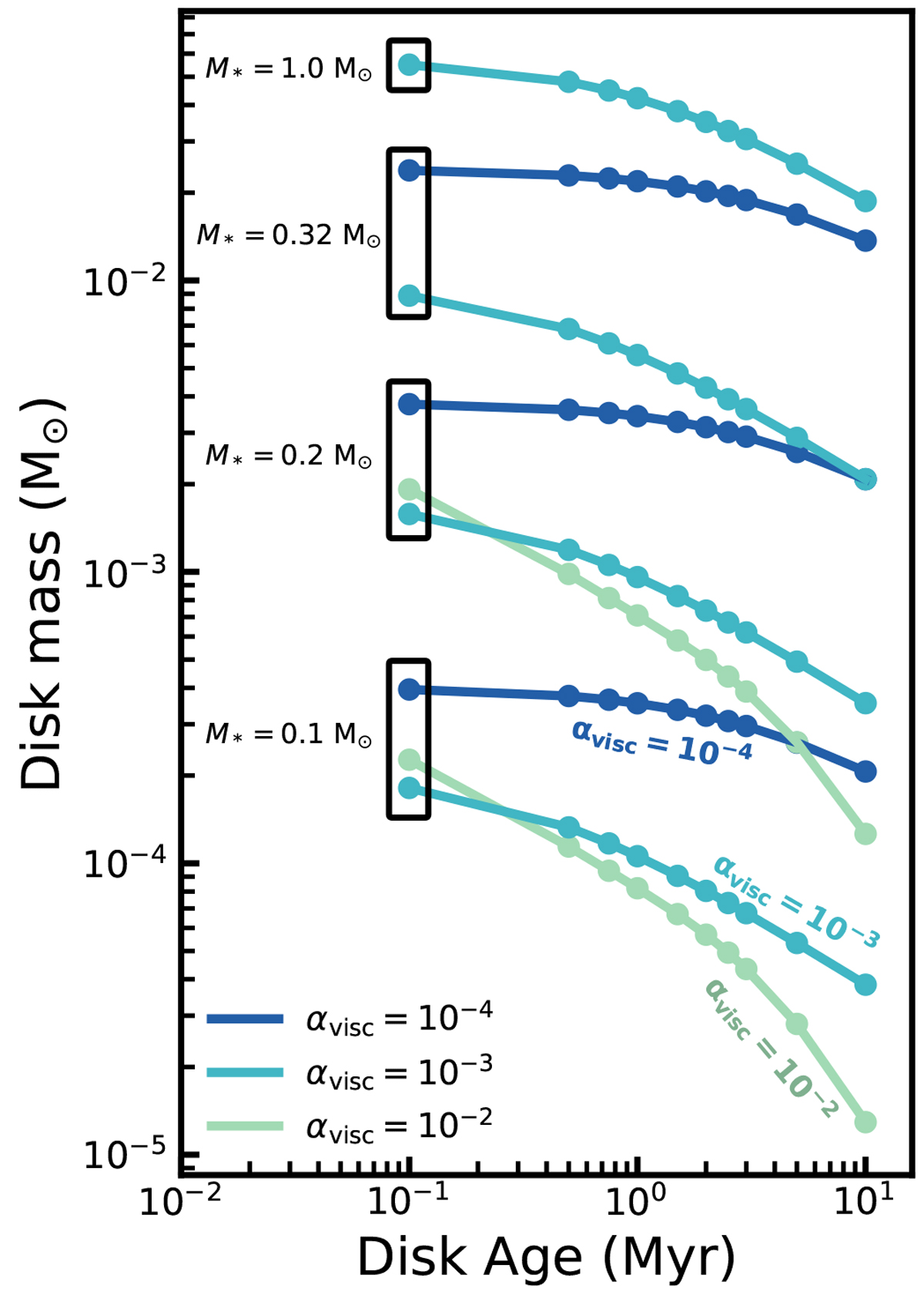