Context. Centaurs go around the Sun between the orbits of Jupiter and Neptune. Only a fraction of the known centaurs have been found to display comet-like features. Comet 29P/Schwassmann-Wachmann 1 is the most remarkable active centaur. It orbits the Sun just beyond Jupiter in a nearly circular path. Only a handful of known objects follow similar trajectories.
Aims: We present photometric observations of 2020 MK4, a recently found centaur with an orbit not too different from that of 29P, and we perform a preliminary exploration of its dynamical evolution.
Methods: We analyzed broadband Cousins R and Sloan g', r', and i' images of 2020 MK4 acquired with the Jacobus Kapteyn Telescope and the IAC80 telescope to search for cometary-like activity and to derive its surface colors and size. Its orbital evolution was studied using direct N-body simulations.
Results: Centaur 2020 MK4 is neutral-gray in color and has a faint, compact cometary-like coma. The values of its color indexes, (g'− r') = 0.42 ± 0.04 and (r'− i') = 0.17 ± 0.04, are similar to the solar ones. A lower limit for the absolute magnitude of the nucleus is Hg = 11.30 ± 0.03 mag which, for an albedo in the range of 0.1-0.04, gives an upper limit for its size in the interval (23, 37) km. Its orbital evolution is very chaotic and 2020 MK4 may be ejected from the Solar System during the next 200 kyr. Comet 29P experienced relatively close flybys with 2020 MK4 in the past, sometimes when they were temporary Jovian satellites.
Conclusions: Based on the analysis of visible CCD images of 2020 MK4, we confirm the presence of a coma of material around a central nucleus. Its surface colors place this centaur among the most extreme members of the gray group. Although the past, present, and future dynamical evolution of 2020 MK4 resembles that of 29P, more data are required to confirm or reject a possible connection between the two objects and perhaps others. 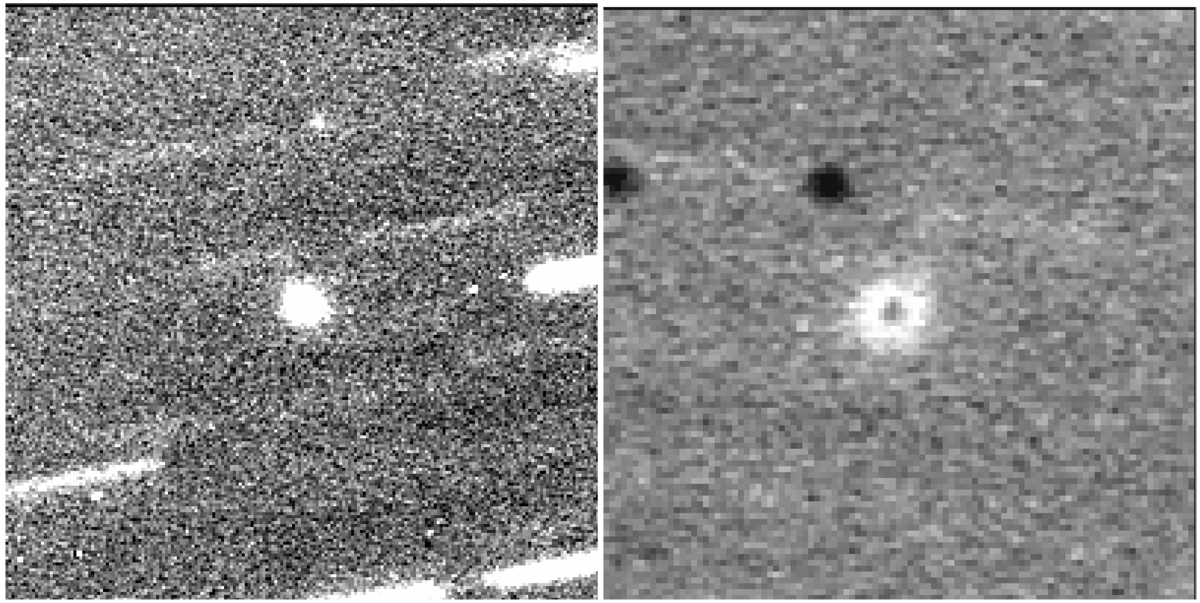