Context. Classical T Tauri stars are young low-mass systems still accreting material from their disks. These systems are dynamic on timescales of hours to years. The observed variability can help us infer the physical processes that occur in the circumstellar environment.
Aims: In this work, we aim at understanding the dynamics of the magnetic interaction between the star and the inner accretion disk in young stellar objects. We present the case of the young stellar system V2129 Oph, which is a well-known T Tauri star with a K5 spectral type that is located in the ρ Oph star formation region at a distance of 130 ± 1 pc.
Methods: We performed a time series analysis of this star using high-resolution spectroscopic data at optical wavelengths from CFHT/ESPaDOnS and ESO/HARPS and at infrared wavelengths from CFHT/SPIRou. We also obtained simultaneous photometry from REM and ASAS-SN. The new data sets allowed us to characterize the accretion-ejection structure in this system and to investigate its evolution over a timescale of a decade via comparisons to previous observational campaigns.
Results: We measure radial velocity variations and recover a stellar rotation period of 6.53 days. However, we do not recover the stellar rotation period in the variability of various circumstellar lines, such as Hα and Hβ in the optical or HeI 10830 Å and Paβ in the infrared. Instead, we show that the optical and infrared line profile variations are consistent with a magnetospheric accretion scenario that shows variability with a period of about 6.0 days, shorter than the stellar rotation period. Additionally, we find a period of 8.5 days in Hα and Hβ lines, probably due to a structure located beyond the corotation radius, at a distance of ∼0.09 au. We investigate whether this could be accounted for by a wind component, twisted or multiple accretion funnel flows, or an external disturbance in the inner disk.
Conclusions: We conclude that the dynamics of the accretion-ejection process can vary significantly on a timescale of just a few years in this source, presumably reflecting the evolving magnetic field topology at the stellar surface. 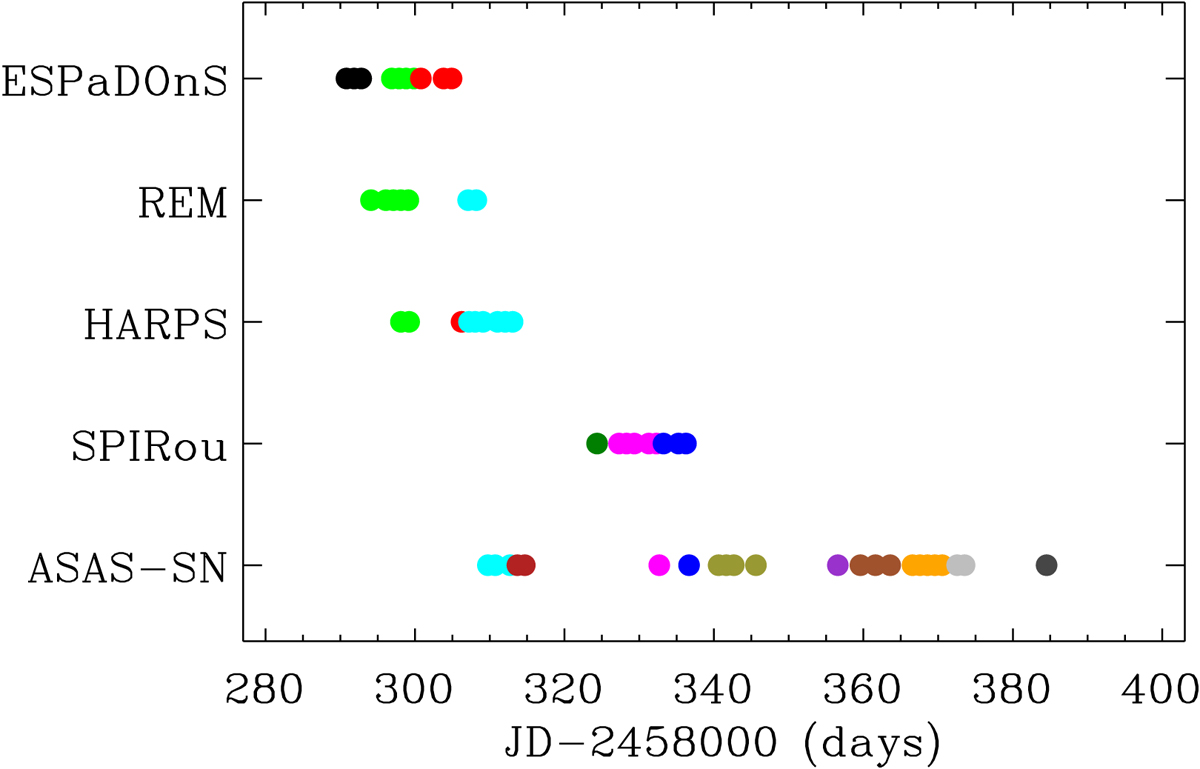