Context. Transiting ultra-hot Jupiters are ideal candidates for studying the exoplanet atmospheres and their dynamics, particularly by means of high-resolution spectra with high signal-to-noise ratios. One such object is KELT-20b. It orbits the fast-rotating A2-type star KELT-20. Many atomic species have been found in its atmosphere, with blueshifted signals that indicate a day- to night-side wind.
Aims: We observe the atmospheric Rossiter-McLaughlin effect in the ultra-hot Jupiter KELT-20b and study any variation of the atmospheric signal during the transit. For this purpose, we analysed five nights of HARPS-N spectra covering five transits of KELT-20b.
Methods: We computed the mean line profiles of the spectra with a least-squares deconvolution using a stellar mask obtained from the Vienna Atomic Line Database (Teff = 10 000 K, log g = 4.3), and then we extracted the stellar radial velocities by fitting them with a rotational broadening profile in order to obtain the radial velocity time-series. We used the mean line profile residuals tomography to analyse the planetary atmospheric signal and its variations. We also used the cross-correlation method to study a previously reported double-peak feature in the FeI planetary signal.
Results: We observed both the classical and the atmospheric Rossiter-McLaughlin effect in the radial velocity time-series. The latter gave us an estimate of the radius of the planetary atmosphere that correlates with the stellar mask used in our work (Rp+atmo∕Rp = 1.13 ± 0.02). We isolated the planetary atmospheric trace in the tomography, and we found radial velocity variations of the planetary atmospheric signal during transit with an overall blueshift of ≈10 km s−1, along with small variations in the signal depth, and less significant, in the full width at half maximum (FWHM). We also find a possible variation in the structure and position of the FeI signal in different transits.
Conclusions: We confirm the previously detected blueshift of the atmospheric signal during the transit. The FWHM variations of the atmospheric signal, if confirmed, may be caused by more turbulent condition at the beginning of the transit, by a variable contribution of the elements present in the stellar mask to the overall planetary atmospheric signal, or by iron condensation. The FeI signal show indications of variability from one transit to the next. 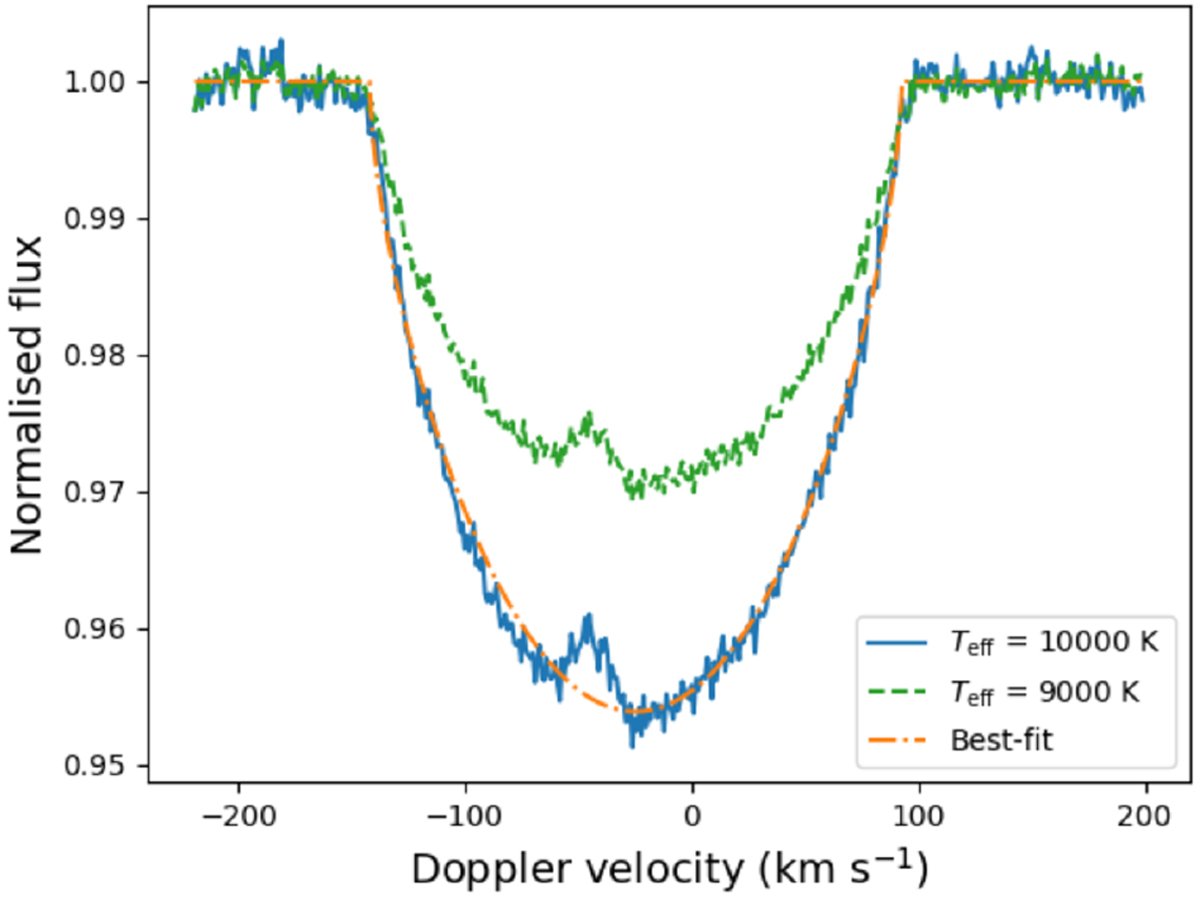