Context. We present the early installment of the third Gaia data release, Gaia EDR3, consisting of astrometry and photometry for 1.8 billion sources brighter than magnitude 21, complemented with the list of radial velocities from Gaia DR2.
Aims: A summary of the contents of Gaia EDR3 is presented, accompanied by a discussion on the differences with respect to Gaia DR2 and an overview of the main limitations which are present in the survey. Recommendations are made on the responsible use of Gaia EDR3 results.
Methods: The raw data collected with the Gaia instruments during the first 34 months of the mission have been processed by the Gaia Data Processing and Analysis Consortium and turned into this early third data release, which represents a major advance with respect to Gaia DR2 in terms of astrometric and photometric precision, accuracy, and homogeneity.
Results: Gaia EDR3 contains celestial positions and the apparent brightness in G for approximately 1.8 billion sources. For 1.5 billion of those sources, parallaxes, proper motions, and the (GBP − GRP) colour are also available. The passbands for G, GBP, and GRP are provided as part of the release. For ease of use, the 7 million radial velocities from Gaia DR2 are included in this release, after the removal of a small number of spurious values. New radial velocities will appear as part of Gaia DR3. Finally, Gaia EDR3 represents an updated materialisation of the celestial reference frame (CRF) in the optical, the Gaia-CRF3, which is based solely on extragalactic sources. The creation of the source list for Gaia EDR3 includes enhancements that make it more robust with respect to high proper motion stars, and the disturbing effects of spurious and partially resolved sources. The source list is largely the same as that for Gaia DR2, but it does feature new sources and there are some notable changes. The source list will not change for Gaia DR3.
Conclusions: Gaia EDR3 represents a significant advance over Gaia DR2, with parallax precisions increased by 30 per cent, proper motion precisions increased by a factor of 2, and the systematic errors in the astrometry suppressed by 30-40% for the parallaxes and by a factor ~2.5 for the proper motions. The photometry also features increased precision, but above all much better homogeneity across colour, magnitude, and celestial position. A single passband for G, GBP, and GRP is valid over the entire magnitude and colour range, with no systematics above the 1% level 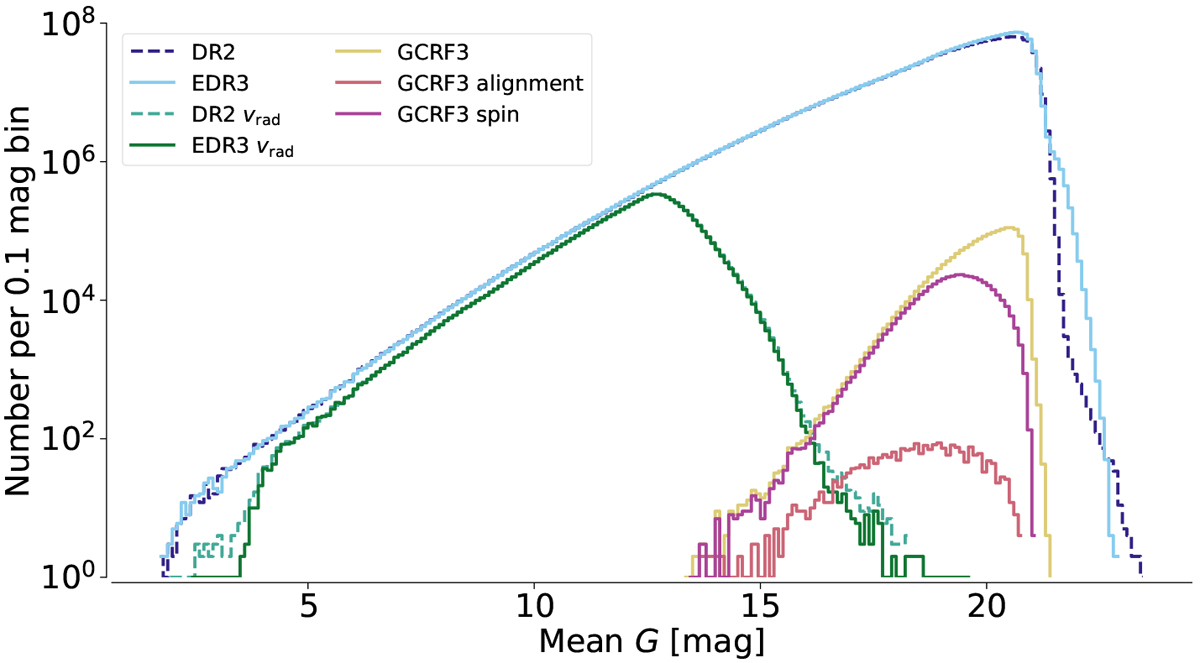