Fragmentation in the massive G31.41+0.31 protocluster

Context. ALMA observations at 1.4 mm and ~0."2 (~750 au) angular resolution of the Main core in the high-mass star-forming region G31.41+0.31 have revealed a puzzling scenario. On the one hand, the continuum emission looks very homogeneous and the core appears to undergo solid-body rotation, suggesting a monolithic core stabilized by the magnetic field; on the other hand, rotation and infall speed up toward the core center, where two massive embedded free-free continuum sources have been detected, pointing to an unstable core having undergone fragmentation.
Aims: To establish whether the Main core is indeed monolithic or if its homogeneous appearance is due to a combination of large dust opacity and low angular resolution, we carried out millimeter observations at higher angular resolution and different wavelengths.
Methods: We carried out ALMA observations at 1.4 mm and 3.5 mm that achieved angular resolutions of ~0."1 (~375 au) and ~0."075 (~280 au), respectively. VLA observations at 7 mm and 1.3 cm at even higher angular resolution, ~0."05 (~190 au) and ~0."07 (~260 au), respectively, were also carried out to better study the nature of the free-free continuum sources detected in the core.
Results: The millimeter continuum emission of the Main core has been clearly resolved into at least four sources, A, B, C, and D, within 1″, indicating that the core is not monolithic. The deconvolved radii of the dust emission of the sources, estimated at 3.5 mm, are ~400-500 au; their masses range from ~15 to ~26 M⊙; and their number densities are several 109 cm−3. Sources A and B, located closer to the center of the core and separated by ~750 au, are clearly associated with two free-free continuum sources, likely thermal radio jets, and are brightest in the core. The spectral energy distribution of these two sources and their masses and sizes are similar and suggest a common origin. Source C has not been detected at centimeter wavelengths, while source D has been clearly detected at 1.3 cm. Source D is likely the driving source of an E-W SiO outflow previously detected in the region, which suggests that the free-free emission might be coming from a radio jet.
Conclusions: The observations have confirmed that the Main core in G31 is collapsing, that it has undergone fragmentation, and that its homogeneous appearance previously observed at short wavelengths is a consequence of both high dust opacity and insufficient angular resolution. The low level of fragmentation together with the fact that the core is moderately magnetically supercritical, suggests that G31 could have undergone a phase of magnetically regulated evolution characterized by a reduced fragmentation efficiency, eventually leading to the formation of a small number of relatively massive dense cores. 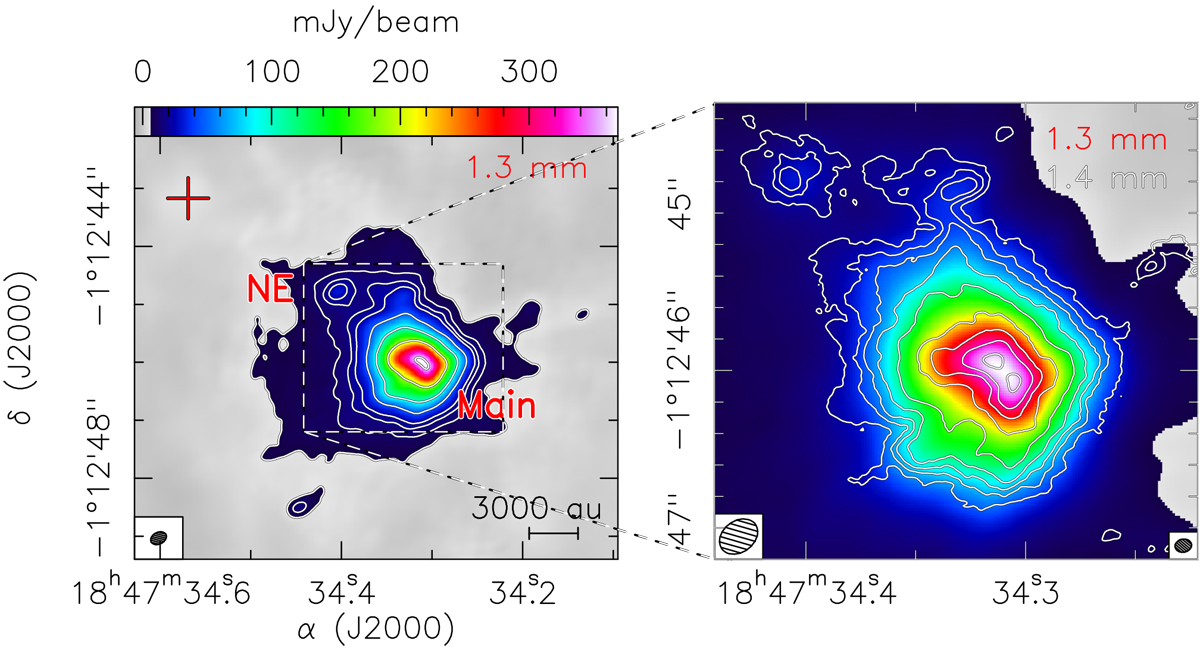