Context. Molecular filaments and hubs have received special attention recently thanks to new studies showing their key role in star formation. While the (column) density and velocity structures of both filaments and hubs have been carefully studied, their magnetic field (B-field) properties have yet to be characterized. Consequently, the role of B-fields in the formation and evolution of hub-filament systems is not well constrained.
Aims: We aim to understand the role of the B-field and its interplay with turbulence and gravity in the dynamical evolution of the NGC 6334 filament network that harbours cluster-forming hubs and high-mass star formation.
Methods: We present new observations of the dust polarized emission at 850 μm toward the 2 pc × 10 pc map of NGC 6334 at a spatial resolution of 0.09 pc obtained with the James Clerk Maxwell Telescope (JCMT) as part of the B-field In STar-forming Region Observations (BISTRO) survey. We study the distribution and dispersion of the polarized intensity (PI), the polarization fraction (PF), and the plane-of-the-sky B-field angle (χB_POS) toward the whole region, along the 10 pc-long ridge and along the sub-filaments connected to the ridge and the hubs. We derived the power spectra of the intensity and χBPOS along the ridge crest and compared them with the results obtained from simulated filaments.
Results: The observations span ~3 orders of magnitude in Stokes I and PI and ~2 orders of magnitude in PF (from ~0.2 to ~ 20%). A large scatter in PI and PF is observed for a given value of I. Our analyses show a complex B-field structure when observed over the whole region (~ 10 pc); however, at smaller scales (~1 pc), χBPOS varies coherently along the crests of the filament network. The observed power spectrum of χBPOS can be well represented with a power law function with a slope of - 1.33 ± 0.23, which is ~20% shallower than that of I. We find that this result is compatible with the properties of simulated filaments and may indicate the physical processes at play in the formation and evolution of star-forming filaments. Along the sub-filaments, χBPOS rotates frombeing mostly perpendicular or randomly oriented with respect to the crests to mostly parallel as the sub-filaments merge with the ridge and hubs. This variation of the B-field structure along the sub-filaments may be tracing local velocity flows of infalling matter in the ridge and hubs. Our analysis also suggests a variation in the energy balance along the crests of these sub-filaments, from magnetically critical or supercritical at their far ends to magnetically subcritical near the ridge and hubs. We also detect an increase in PF toward the high-column density (NH2 ≳ 1023 cm-2) star cluster-forming hubs. These latter large PF values may be explained by the increase in grain alignment efficiency due to stellar radiation from the newborn stars, combined with an ordered B-field structure.
Conclusions: These observational results reveal for the first time the characteristics of the small-scale (down to ~ 0.1 pc) B-field structure of a 10 pc-long hub-filament system. Our analyses show variations in the polarization properties along the sub-filaments that may be tracing the evolution of their physical properties during their interaction with the ridge and hubs. We also detect an impact of feedback from young high-mass stars on the local B-field structure and the polarization properties, which could put constraints on possible models for dust grain alignment and provide important hints as to the interplay between the star formation activity and interstellar B-fields. 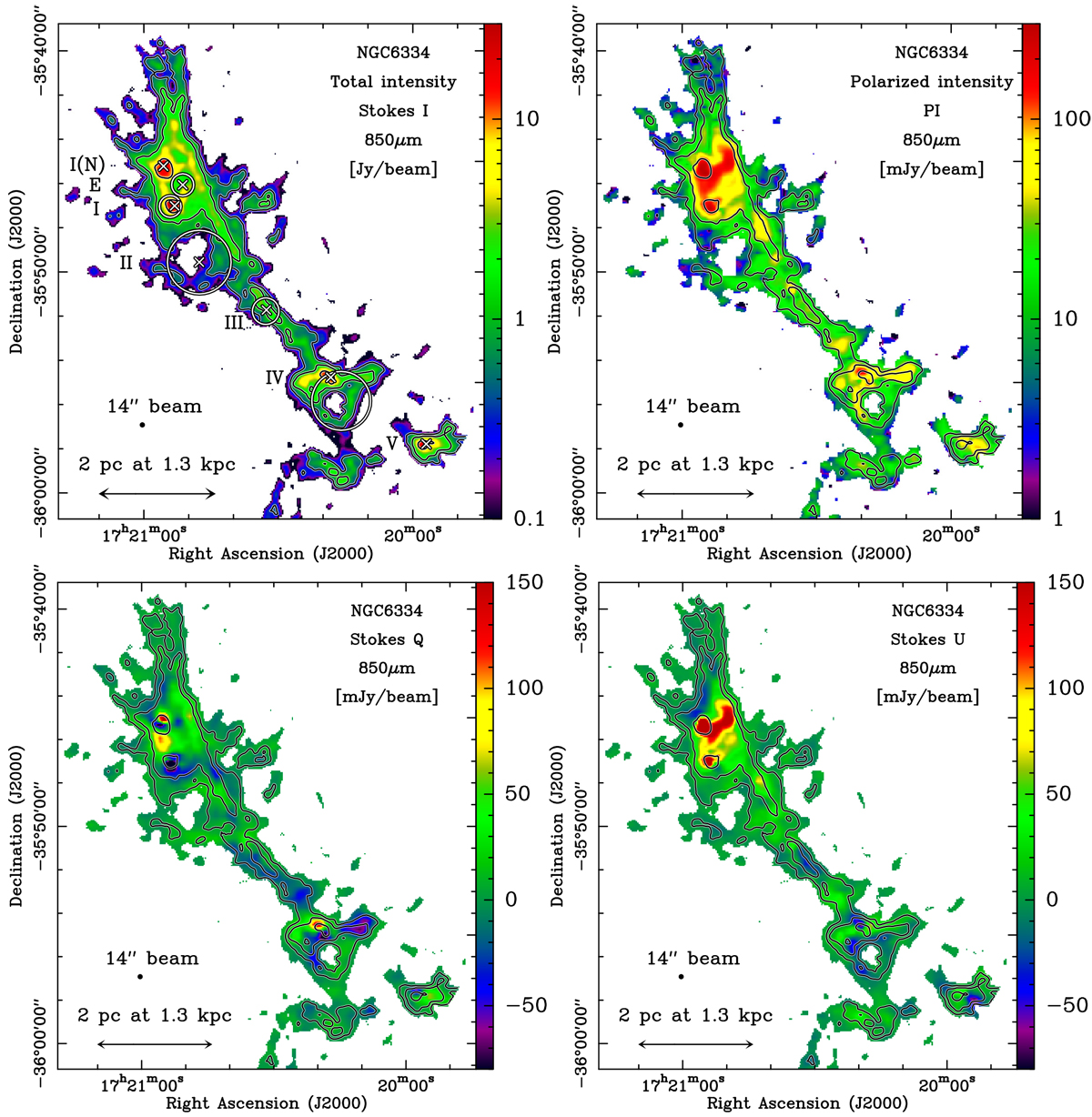