Context. Class II methanol masers are signposts of massive young stellar objects (MYSOs). Recent evidence shows that flares of these masers are driven by MYSO accretion bursts. Thus, maser monitoring can be used to identify such bursts which are hard to discover otherwise. Infrared observations reveal burst-induced changes in the spectral energy distribution (first and foremost a luminosity increase), which provide valuable information on a very intense phase of high-mass star formation.
Aims: In mid-January 2019, flaring of the 6.7 GHz CH3OH maser (hereafter maser) of the MYSO G358.93-0.03 (hereafter G358) was reported. The international maser community initiated an extensive observational campaign which revealed extraordinary maser activity and yielded the detection of numerous new masering transitions. Interferometric imaging with the Atacama Large Millimeter/submillimeter Array and the Submillimeter Array resolved the maser emitting core of the star forming region and proved the association of the masers with the brightest continuum source (MM1), which hosts a hot molecular core. These observations, however, failed to detect a significant rise in the (sub)millimeter dust continuum emission. Therefore, we performed near-infrared (NIR) and far-infrared (FIR) observations to prove or disprove whether the CH3OH flare was driven by an accretion burst.
Methods: NIR imaging with the Gamma-Ray Burst Optical/Near-infrared Detector has been acquired and integral-field spectroscopy with the Field-Imaging Far-Infrared Line Spectrometer (FIFI-LS) aboard the Stratospheric Observatory for Infrared Astronomy (SOFIA) was carried out on two occasions to detect possible counterparts to the (sub)millimeter sources and compare their photometry to archival measurements. The comparison of pre-burst and burst spectral energy distributions is of crucial importance to judge whether a substantial luminosity increase, caused by an accretion burst, is present and if it triggered the maser flare. Radiative transfer modeling of the spectral energy distribution (SED) of the dust continuum emission at multiple epochs provides valuable information on the bursting MYSO.
Results: The FIR fluxes of MM1 measured with FIFI-LS exceed those from Herschel significantly, which clearly confirms the presence of an accretion burst. The second epoch data, taken about 16 months later, still show increased fluxes. Our radiative transfer modeling yielded major burst parameters and suggests that the MYSO features a circumstellar disk which might be transient. From the pre-burst, burst, and post-burst SEDs, conclusions on heating and cooling time-scales could be drawn. Circumstances of the burst-induced maser relocation have been explored.
Conclusions: The verification of the accretion burst from G358 is another confirmation that Class II methanol maser flares represent an alert for such events. Thus, monitoring of these masers greatly enhances the chances of identifying MYSOs during periods of intense growth. The few events known to date already indicate that there is a broad range in burst strength and duration as well as environmental characteristics. The G358 event is the shortest and least luminous accretion burst known to date. According to models, bursts of this kind occur most often.

Based on observations collected at the European Organization for Astronomical Research in the Southern Hemisphere under ESO program 0103.C-9033(A). Based on observations made with the NASA/DLR Stratospheric Observatory for Infrared Astronomy (SOFIA) under Proposal IDs 75_0037 and 08_0163. 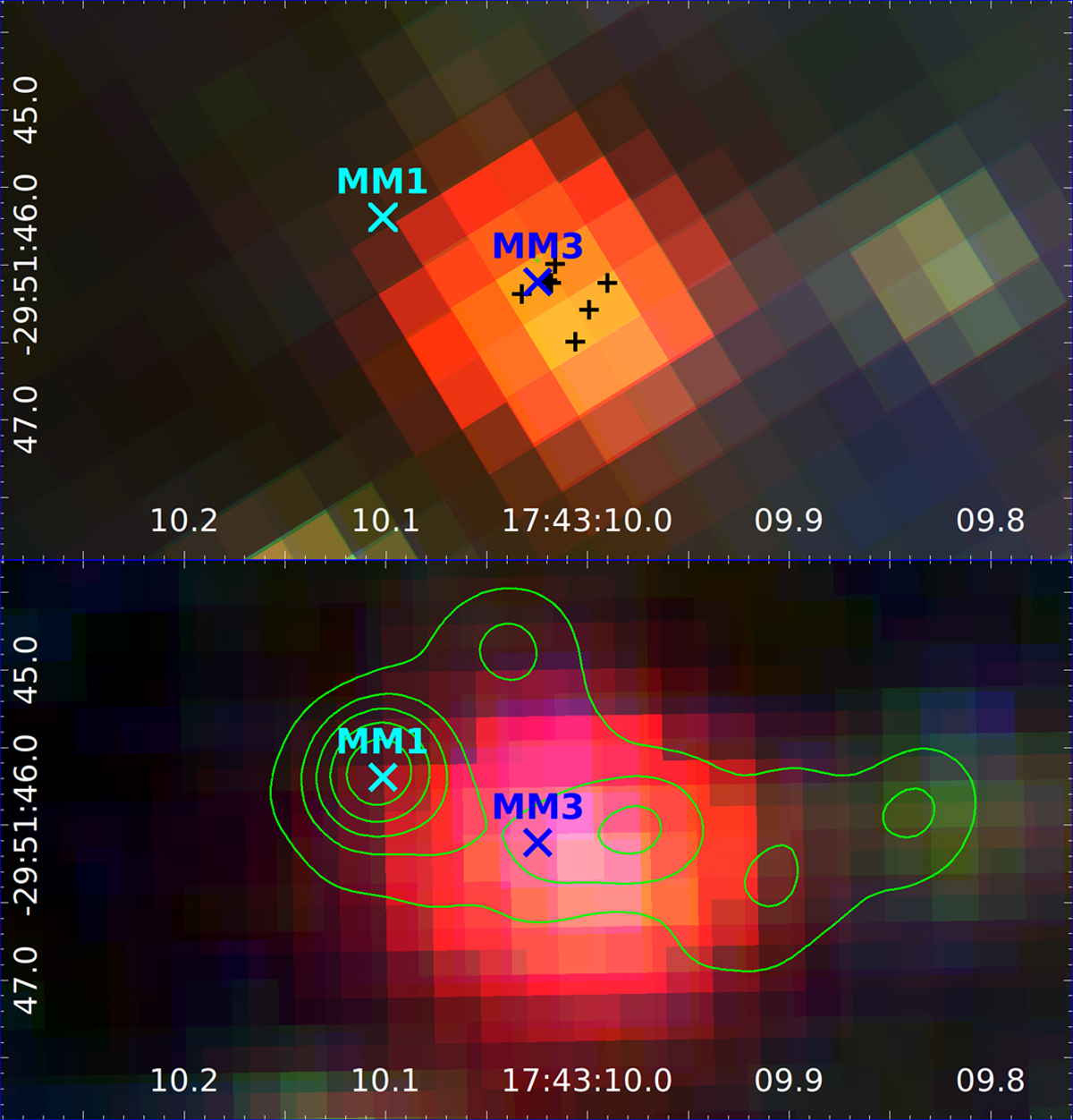