Overdensity of VVV galaxies behind the Galactic bulge

Context. The extragalactic vision we have through the Milky Way is very unclear. There is significant extinction of the optical emission from objects located in the region called the zone of avoidance (ZOA). NIR wavelengths are less affected by extinction, and therefore the infrared surveys in this zone are a potential source of astronomical discoveries. Nevertheless, these observations need to be compared with cosmological simulations in order to carry out high-accuracy studies.
Aims: Our aim is to identify extragalactic sources in the ZOA, using infrared images of the VVV survey. We consider mock galaxy catalogues in order to interpret observational results.
Methods: We studied a region of 1.636 square degrees corresponding to the VVV tile b204. Using SExtractor, we analysed photometric data generating a catalogue of extended sources in this area. In order to confirm these sources as galaxy candidates we visually inspected RGB images looking for typical galaxy features. Using 2MASX and GCMW catalogued sources we tested completeness and contamination of our catalogue and define suitable colour cuts to select galaxies. We also compared the observational results with those obtained from two semi-analytical models on Dark Matter simulations. One galaxy catalogue was constructed with the SAG semi-analytic model of galaxy formation, and the other one was constructed with the L-Galaxies semi-analytic model.
Results: By adopting CLASS_STAR < 0.5, r1/2 > 0.7 arcsec and specific colour cuts (J - Ks > 0.97, J - H > 0 and H - Ks > 0) we generated an automatic catalogue of extended sources. After visual inspection we identified 624 sources with 10 < Ks < 17 as galaxy candidates. The contamination of the automatic catalogue is 28% when considering visually confirmed galaxies as reliable objects. The estimated completeness is 87% up to magnitude Ks = 13.5. We analysed the spatial distribution of galaxy candidates, finding a high concentration of galaxies in a small region of 15 arcmin radius. This region has three times higher density than similar areas in the tile. We compared the number of galaxies in this small area with the mean density values obtained from a suitable sample of galaxies from semi-analytic models finding that our results are consistent with an overdensity region.
Conclusions: Using VVV near-infrared data and mock catalogues we detect new extragalactic sources that have not been identified by other catalogues. We demonstrate the potentiality of the VVV survey in finding and studying a large number of galaxy candidates and extragalactic structures obscured by the Milky Way. 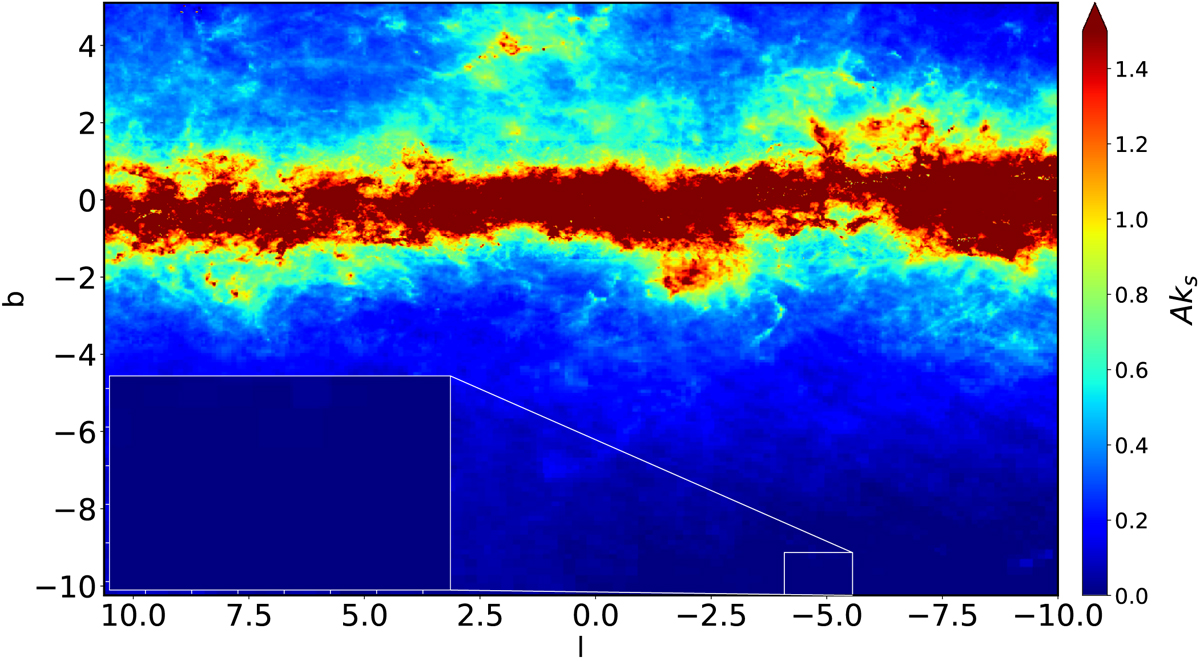