We study the multiphase feedback processes in the central ∼3 kpc of the barred Seyfert 2 galaxy NGC 5643. We used observations of the cold molecular gas (ALMA CO(2-1) transition) and ionized gas (MUSE IFU optical emission lines). We studied different regions along the outflow zone, which extends out to ∼2.3 kpc in the same direction (east-west) as the radio jet, as well as nuclear and circumnuclear regions in the host galaxy disk. The CO(2-1) line profiles of regions in the outflow and spiral arms show two or more different velocity components: one associated with the host galaxy rotation, and the others with out- or inflowing material. In the outflow region, the [O III]λ5007 Å emission lines have two or more components: the narrow component traces rotation of the gas in the disk, and the others are related to the ionized outflow. The deprojected outflowing velocities of the cold molecular gas (median Vcentral ∼ 189 km s-1) are generally lower than those of the outflowing ionized gas, which reach deprojected velocities of up to 750 km s-1 close to the active galactic nucleus (AGN), and their spatial profiles follow those of the ionized phase. This suggests that the outflowing molecular gas in the galaxy disk is being entrained by the AGN wind. We derive molecular and ionized outflow masses of ∼5.2 × 107 M⊙ (αCOGalactic) and 8.5 × 104 M⊙ and molecular and ionized outflow mass rates of ∼51 M⊙ yr-1 (αCOGalactic) and 0.14 M⊙ yr-1, respectively. This means that the molecular phase dominates the outflow mass and outflow mass rate, while the kinetic power and momentum of the outflow are similar in both phases. However, the wind momentum loads (Ṗout/ṖAGN) for the molecular and ionized outflow phases are ∼27-5 (αCOGalactic and αCOULIRGs) and < 1, which suggests that the molecular phase is not momentum conserving, but the ionized phase most certainly is. The molecular gas content (Meast ∼ 1.5 × 107 M⊙; αCOGalactic) of the eastern spiral arm is approximately 50-70% of the content of the western one. We interpret this as destruction or clearing of the molecular gas produced by the AGN wind impacting in the eastern side of the host galaxy (negative feedback process). The increase in molecular phase momentum implies that part of the kinetic energy from the AGN wind is transmitted to the molecular outflow. This suggests that in Seyfert-like AGN such as NGC 5643, the radiative or quasar and the kinetic or radio AGN feedback modes coexist and may shape the host galaxies even at kiloparsec scales through both positive and (mild) negative feedback. 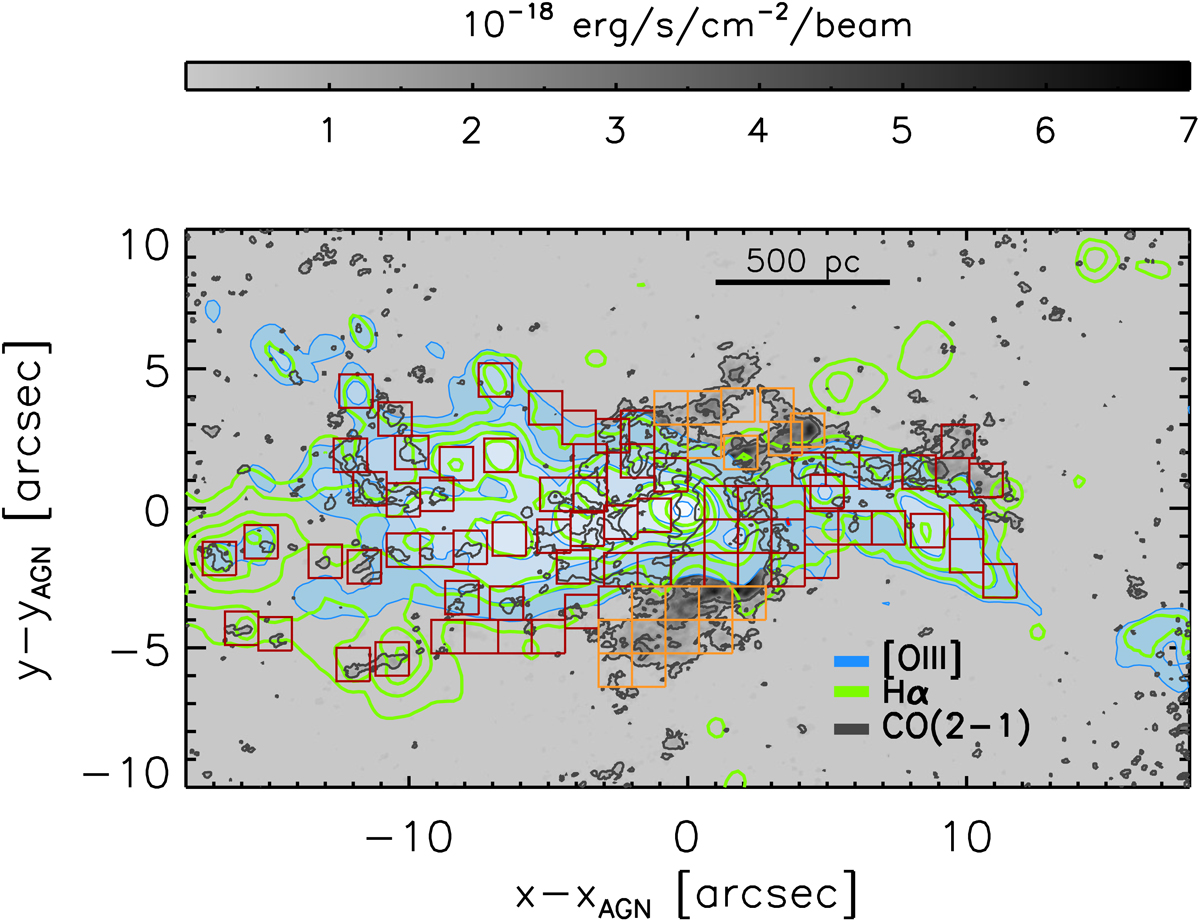