Investigating the origin of magnetic perturbations associated with the FIP Effect

Recently, magnetic oscillations were detected in the chromosphere of a large sunspot and found to be linked to the coronal locations where a first ionization potential (FIP) effect was observed. In an attempt to shed light on the possible excitation mechanisms of these localized waves, we further investigate the same data by focusing on the relation between the spatial distribution of the magnetic wave power and the overall field geometry and plasma parameters obtained from multi-height spectropolarimetric non-local thermodynamic equilibrium (NLTE) inversions of IBIS data. We find, in correspondence with the locations where the magnetic wave energy is observed at chromospheric heights, that the magnetic fields have smaller scale heights, meaning faster expansions of the field lines, which ultimately results in stronger vertical density stratification and wave steepening. In addition, the acoustic spectrum of the oscillations at the locations where magnetic perturbations are observed is broader than that observed at other locations, which suggests an additional forcing driver to the p-modes. Analysis of the photospheric oscillations in the sunspot surroundings also reveals a broader spectrum between the two opposite polarities of the active region (the leading spot and the trailing opposite polarity plage), and on the same side where magnetic perturbations are observed in the umbra. We suggest that strong photospheric perturbations between the two polarities are responsible for this broader spectrum of oscillations, with respect to the p-mode spectrum, resulting in locally excited acoustic waves that, after crossing the equipartition layer, located close to the umbra-penumbra boundary at photopheric heights, are converted into magnetic waves and steepen due to the strong density gradient.

Movie associated to Fig. 1 is available at https://www.aanda.org 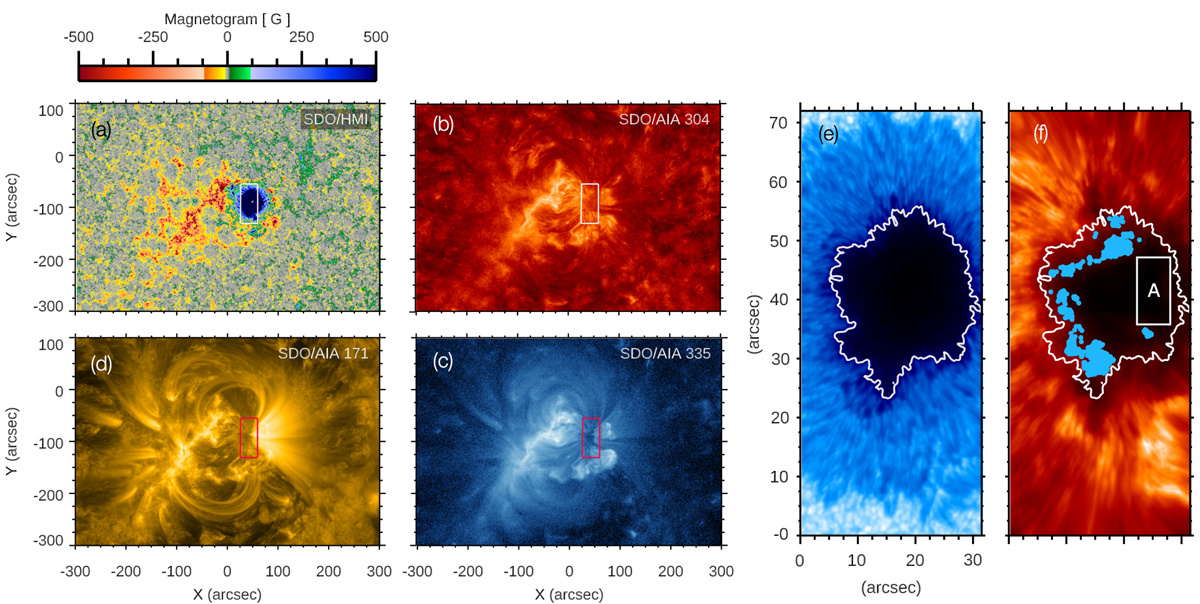