The Sun at millimeter wavelengths. III. Impact of the spatial resolution on solar ALMA observations

Context. Interferometric observations of the Sun with the Atacama Large Millimeter/sub-millimeter Array (ALMA) provide valuable diagnostic tools for studying the small-scale dynamics of the solar atmosphere.
Aims: The aims are to perform estimations of the observability of the small-scale dynamics as a function of spatial resolution for regions with different characteristic magnetic field topology facilitate a more robust analysis of ALMA observations of the Sun.
Methods: A three-dimensional model of the solar atmosphere from the radiation-magnetohydrodynamic code Bifrost was used to produce high-cadence observables at millimeter and submillimeter wavelengths. The synthetic observables for receiver bands 3-10 were degraded to the angular resolution corresponding to ALMA observations with different configurations of the interferometric array from the most compact, C1, to the more extended, C7. The observability of the small-scale dynamics was analyzed in each case. The analysis was thus also performed for receiver bands and resolutions that are not commissioned so far for solar observations as a means for predicting the potential of future capabilities.
Results: The minimum resolution required to study the typical small spatial scales in the solar chromosphere depends on the characteristic properties of the target region. Here, a range from quiet Sun to enhanced network loops is considered. Limited spatial resolution affects the observable signatures of dynamic small-scale brightening events in the form of reduced brightness temperature amplitudes, potentially leaving them undetectable, and even shifts in the times at which the peaks occur of up to tens of seconds. Conversion factors between the observable brightness amplitude and the original amplitude in the fully resolved simulation are provided that can be applied to observational data in principle, but are subject to wavelength-dependent uncertainties. Predictions of the typical appearance at the different combinations of receiver band, array configuration, and properties of the target region are conducted.
Conclusions: The simulation results demonstrate the high scientific potential that ALMA already has with the currently offered capabilities for solar observations. For the study of small-scale dynamic events, however, the spatial resolution is still crucial, and wide array configurations are preferable. In any case, it is essential to take the effects due to limited spatial resolution into account in the analysis of observational data. Finally, the further development of observing capabilities including wider array configurations and advanced imaging procedures yields a high potential for future ALMA observations of the Sun. 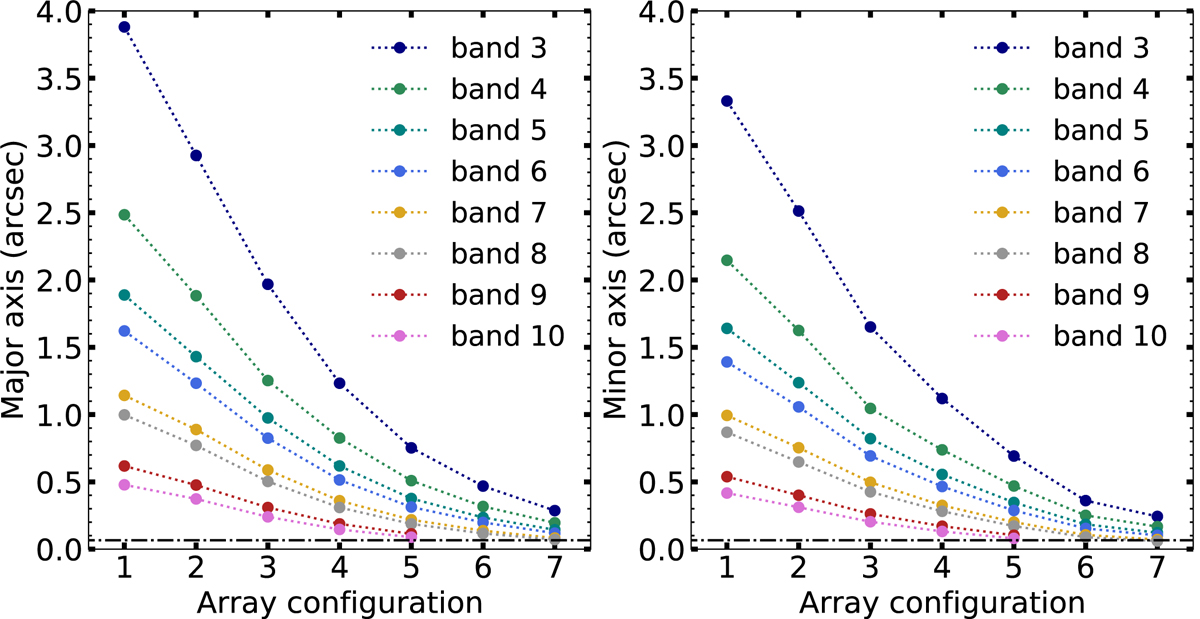