Context. On 2020 April 19 a coronal mass ejection (CME) was detected in situ by Solar Orbiter at a heliocentric distance of about 0.8 AU. The CME was later observed in situ on April 20 by the Wind and BepiColombo spacecraft whilst BepiColombo was located very close to Earth. This CME presents a good opportunity for a triple radial alignment study, as the spacecraft were separated by less than 5° in longitude. The source of the CME, which was launched on April 15, was an almost entirely isolated streamer blowout. The Solar Terrestrial Relations Observatory (STEREO)-A spacecraft observed the event remotely from −75.1° longitude, which is an exceptionally well suited viewpoint for heliospheric imaging of an Earth directed CME.
Aims: The configuration of the four spacecraft has provided an exceptionally clean link between remote imaging and in situ observations of the CME. We have used the in situ observations of the CME at Solar Orbiter, Wind, and BepiColombo and the remote observations of the CME at STEREO-A to determine the global shape of the CME and its evolution as it propagated through the inner heliosphere.
Methods: We used three magnetic flux rope models that are based on different assumptions about the flux rope morphology to interpret the large-scale structure of the interplanetary CME (ICME). The 3DCORE model assumes an elliptical cross-section with a fixed aspect-ratio calculated by using the STEREO Heliospheric Imager (HI) observations as a constraint. The other two models are variants of the kinematically-distorted flux rope (KFR) technique, where two flux rope cross-sections are considered: one in a uniform solar wind and another in a solar-minimum-like structured solar wind. Analysis of CME evolution has been complemented by the use of (1) the ELEvoHI model to compare predicted CME arrival times and confirm the connection between the imaging and in situ observations, and (2) the PREDSTORM model, which provides an estimate of the Dst index at Earth using Solar Orbiter magnetometer data as if it were a real-time upstream solar wind monitor.
Results: A clear flattening of the CME cross-section has been observed by STEREO-A, and further confirmed by comparing profiles of the flux rope models to the in situ data, where the distorted flux rope cross-section qualitatively agrees most with in situ observations of the magnetic field at Solar Orbiter. Comparing in situ observations of the magnetic field between spacecraft, we find that the dependence of the maximum (mean) magnetic field strength decreases with heliocentric distance as r−1.24 ± 0.50 (r−1.12 ± 0.14), which is in disagreement with previous studies. Further assessment of the axial and poloidal magnetic field strength dependencies suggests that the expansion of the CME is likely neither self-similar nor cylindrically symmetric. 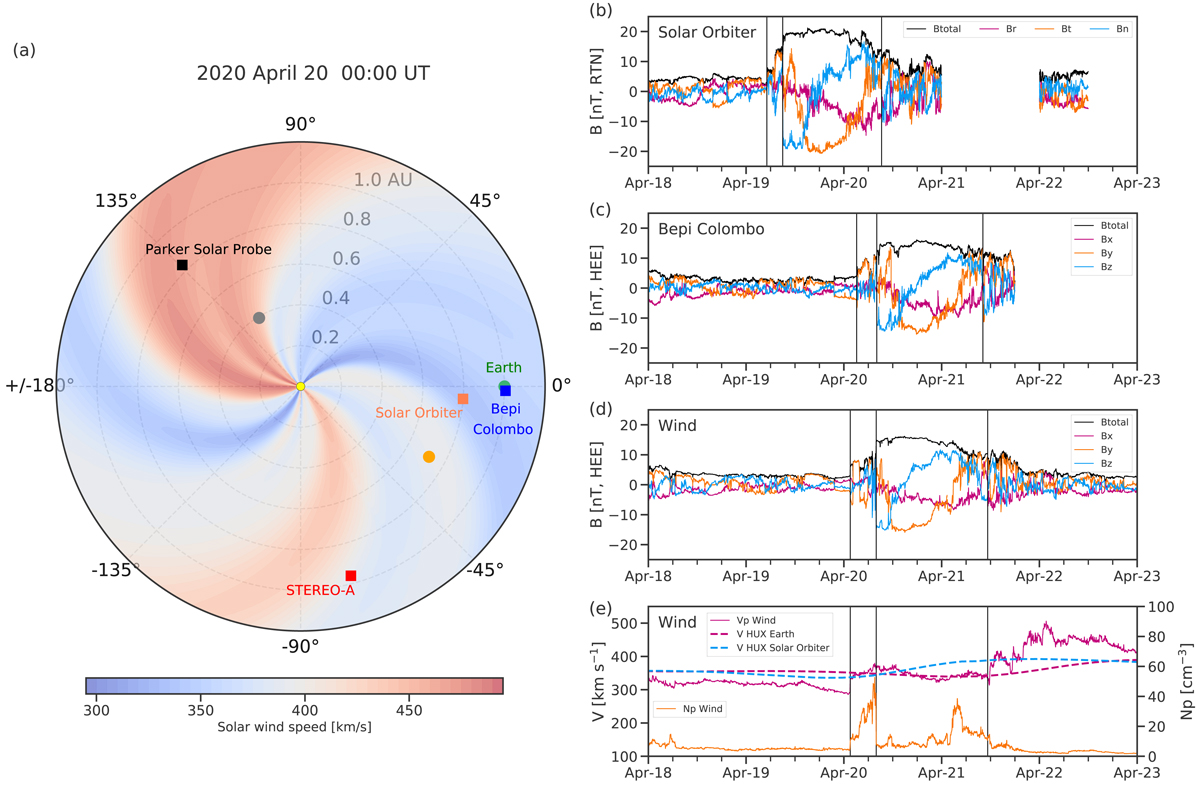