V838 Monocerotis as seen by ALMA: A remnant of a binary merger in a triple system

Context. V838 Mon erupted in 2002, quickly becoming the prototype of a new type of stellar eruption known today as the (luminous) red nova. Red nova outbursts are thought to be caused by stellar mergers. The merger in V838 Mon took place in a triple or higher system involving two B-type stars.
Aims: We wish to characterize the merger remnant ~17 yr after the eruption to learn more about the remaining system, the progenitor, and the merger physics.
Methods: We mapped the merger site with ALMA at a resolution of ~25 mas, or 148 au for a distance of 5.9 kpc, in continuum dust emission and in rotational lines of simple molecules, including CO, SiO, SO, SO2, AlOH, and H2S. We use radiative transfer calculations to reproduce the architecture of the remnant at the epoch of the ALMA observations. We also make use of optical spectroscopy data obtained mainly with VLT/X-shooter and SALT/HRS.
Results: For the first time, we identify the position of the B-type companion relative to the outbursting component of V838 Mon. The stellar remnant is surrounded by a clumpy wind with characteristics similar to those of the winds of red supergiants. The merger product is also associated with an elongated structure of 17.6 × 7.6 mas (104 × 45 au) seen in continuum emission, and which we interpret as a disk seen at a moderate inclination. Maps of continuum and molecular emission also show a complex region of interaction between the B-type star (its gravity, radiation, and wind) and the flow of matter ejected in 2002. The remnant's molecular mass is about 0.1 M⊙ and the dust mass is 8.3 × 10−3 M⊙. The mass of the atomic component remains unconstrained.
Conclusions: The most interesting region for understanding the merger of V838 Mon lies in its direct vicinity and appears elongated, but details of its substructure remain unknown. To study it further and in more detail will require even higher angular resolutions. ALMA maps show us an extreme form of interaction between the merger ejecta and the distant (~250 au) companion. This interaction is similar to that known from the Anteres AB system but at a much higher mass loss rate. The B-type star not only deflects the merger ejecta but also changes its molecular composition with an involvement of circumstellar shocks. The ALMA view of V838 Mon offers the best images of a merger site so far.

Movies associated with Figs. 9 and 12 are available at https://www.aanda.org 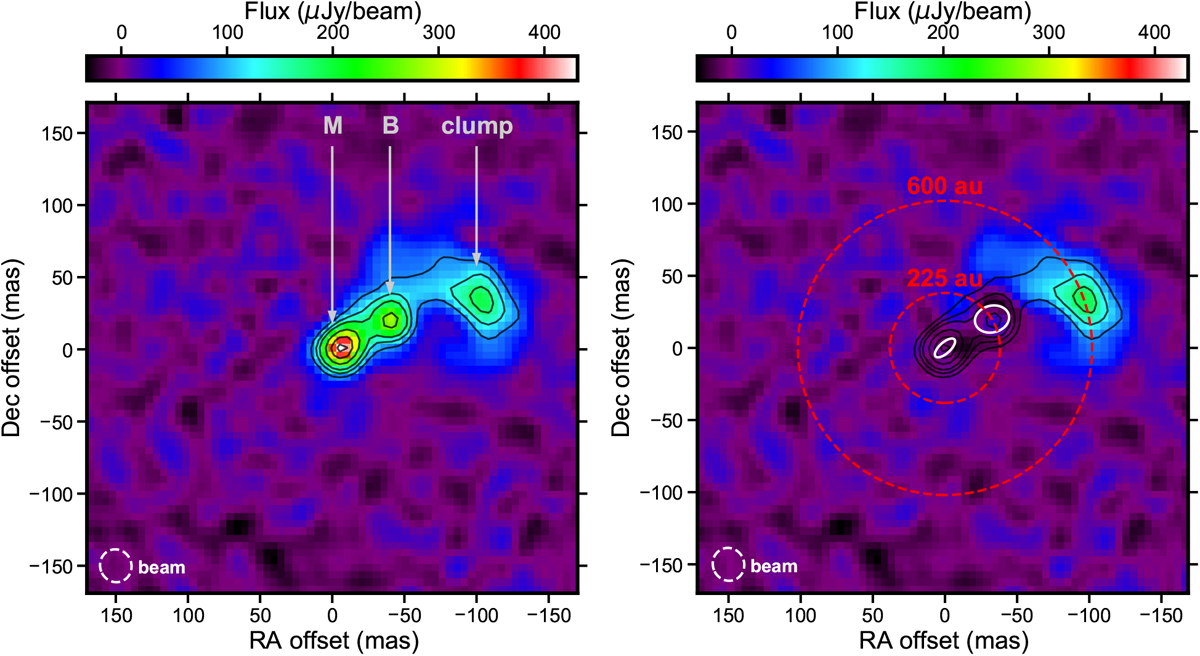