Context. The recent estimates of the 3D shape of the M/Xe-type triple asteroid system (216) Kleopatra indicated a density of ~5 g cm−3, which is by far the highest for a small Solar System body. Such a high density implies a high metal content as well as a low porosity which is not easy to reconcile with its peculiar "dumbbell" shape.
Aims: Given the unprecedented angular resolution of the VLT/SPHERE/ZIMPOL camera, here, we aim to constrain the mass (via the characterization of the orbits of the moons) and the shape of (216) Kleopatra with high accuracy, hence its density.
Methods: We combined our new VLT/SPHERE observations of (216) Kleopatra recorded during two apparitions in 2017 and 2018 with archival data from the W. M. Keck Observatory, as well as lightcurve, occultation, and delay-Doppler images, to derive a model of its 3D shape using two different algorithms (ADAM, MPCD). Furthermore, an N-body dynamical model allowed us to retrieve the orbital elements of the two moons as explained in the accompanying paper.
Results: The shape of (216) Kleopatra is very close to an equilibrium dumbbell figure with two lobes and a thick neck. Its volume equivalent diameter (118.75 ± 1.40) km and mass (2.97 ± 0.32) × 1018 kg (i.e., 56% lower than previously reported) imply a bulk density of (3.38 ± 0.50) g cm−3. Such a low density for a supposedly metal-rich body indicates a substantial porosity within the primary. This porous structure along with its near equilibrium shape is compatible with a formation scenario including a giant impact followed by reaccumulation. (216) Kleopatra's current rotation period and dumbbell shape imply that it is in a critically rotating state. The low effective gravity along the equator of the body, together with the equatorial orbits of the moons and possibly rubble-pile structure, opens the possibility that the moons formed via mass shedding.
Conclusions: (216) Kleopatra is a puzzling multiple system due to the unique characteristics of the primary. This system certainly deserves particular attention in the future, with the Extremely Large Telescopes and possibly a dedicated space mission, to decipher its entire formation history.

Reduced images are only available at the CDS via anonymous ftp to cdsarc.u-strasbg.fr (ftp://130.79.128.5) or via http://cdsarc.u-strasbg.fr/viz-bin/cat/J/A+A/653/A57 Based on observations made with ESO Telescopes at the La Silla Paranal Observatory under program 199.C-0074 (PI: Vernazza). 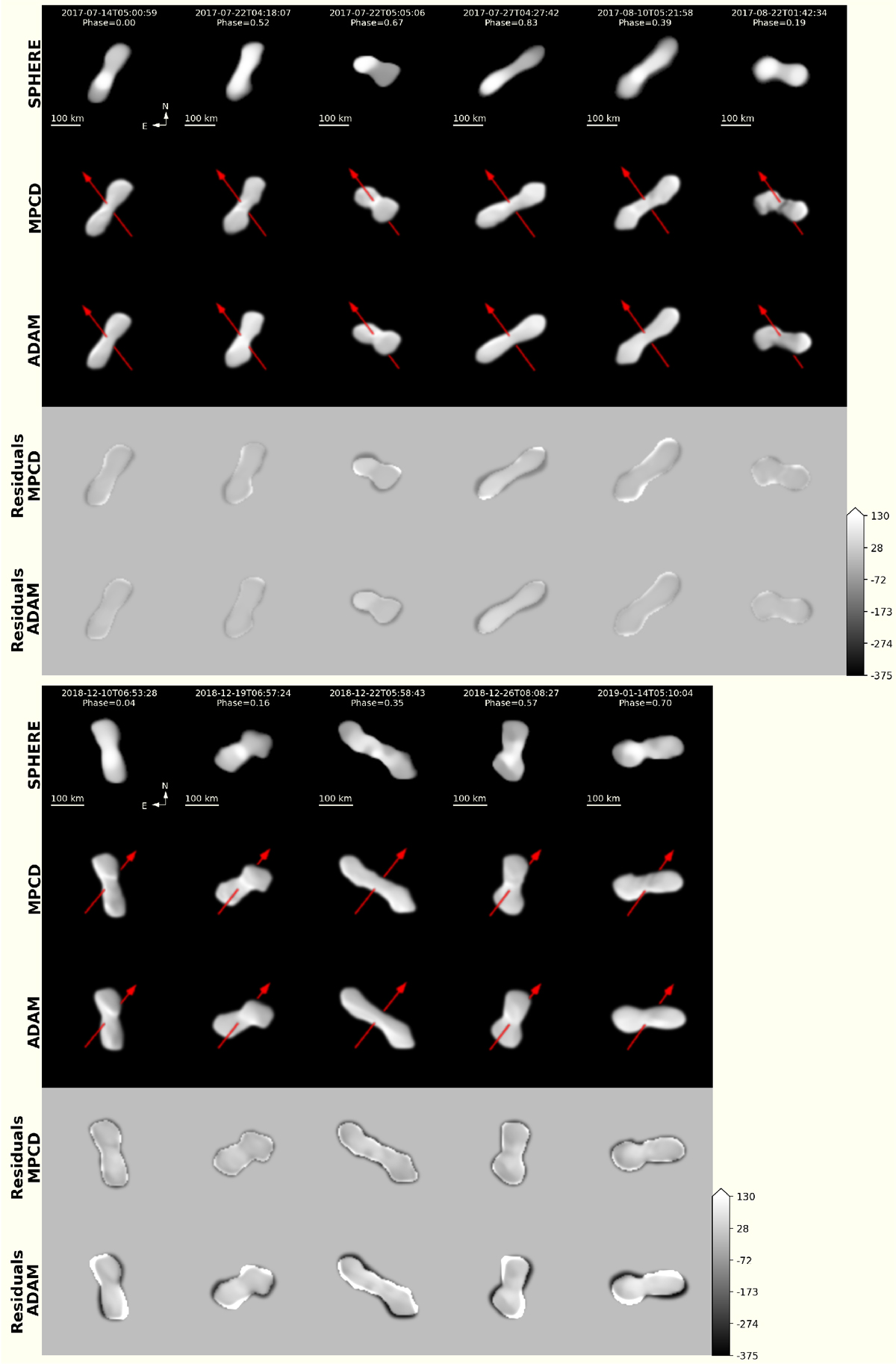