Collapse of turbulent massive cores with ambipolar diffusion and hybrid radiative transfer. I. Accretion and multiplicity

Context. Massive stars form in magnetized and turbulent environments and are often located in stellar clusters. The accretion and outflows mechanisms associated with forming massive stars and the origin of the stellar multiplicity of their system are poorly understood.
Aims: We study the effect of magnetic fields and turbulence on the accretion mechanism of massive protostars and their multiplicity. We also focus on disk formation as a prerequisite for outflow launching.
Methods: We present a series of four radiation-magnetohydrodynamical simulations of the collapse of a massive magnetized, turbulent core of 100 M⊙ with the adaptive-mesh-refinement code RAMSES, including a hybrid radiative transfer method for stellar irradiation and ambipolar diffusion. We varied the Mach and Alfvénic Mach numbers to probe sub- and super-Alfvénic turbulence and sub- and supersonic turbulence regimes.
Results: Sub-Alfvénic turbulence leads to single stellar systems, and super-Alfvénic turbulence leads to binary formation from disk fragmentation following the collision of spiral arms, with mass ratios of 1.1-1.6 and a separation of several hundred AU that increases with initial turbulent support and with time. In these runs, infalling gas reaches the individual disks through a transient circumbinary structure. Magnetically regulated, thermally dominated (plasma beta β > 1) Keplerian disks form in all runs, with sizes 100-200 AU and masses 1-8 M⊙. The disks around primary and secondary sink particles have similar properties. We obtain mass accretion rates of ~10−4 M⊙ yr−1 onto the protostars and observe higher accretion rates onto the secondary stars than onto their primary star companion. The primary disk orientation is found to be set by the initial angular momentum carried by turbulence rather than by magnetic fields. Even without turbulence, axisymmetry and north-south symmetry with respect to the disk plane are broken by the interchange instability and thermally dominated streamers, respectively.
Conclusions: Small (≲300 AU) massive protostellar disks such as those that are frequently observed today can so far only be reproduced in the presence of (moderate) magnetic fields with ambipolar diffusion, even in a turbulent medium. The interplay between magnetic fields and turbulence sets the multiplicity of stellar clusters. A plasma beta β > 1 is a good indicator for distinguishing streamers and individual disks from their surroundings. 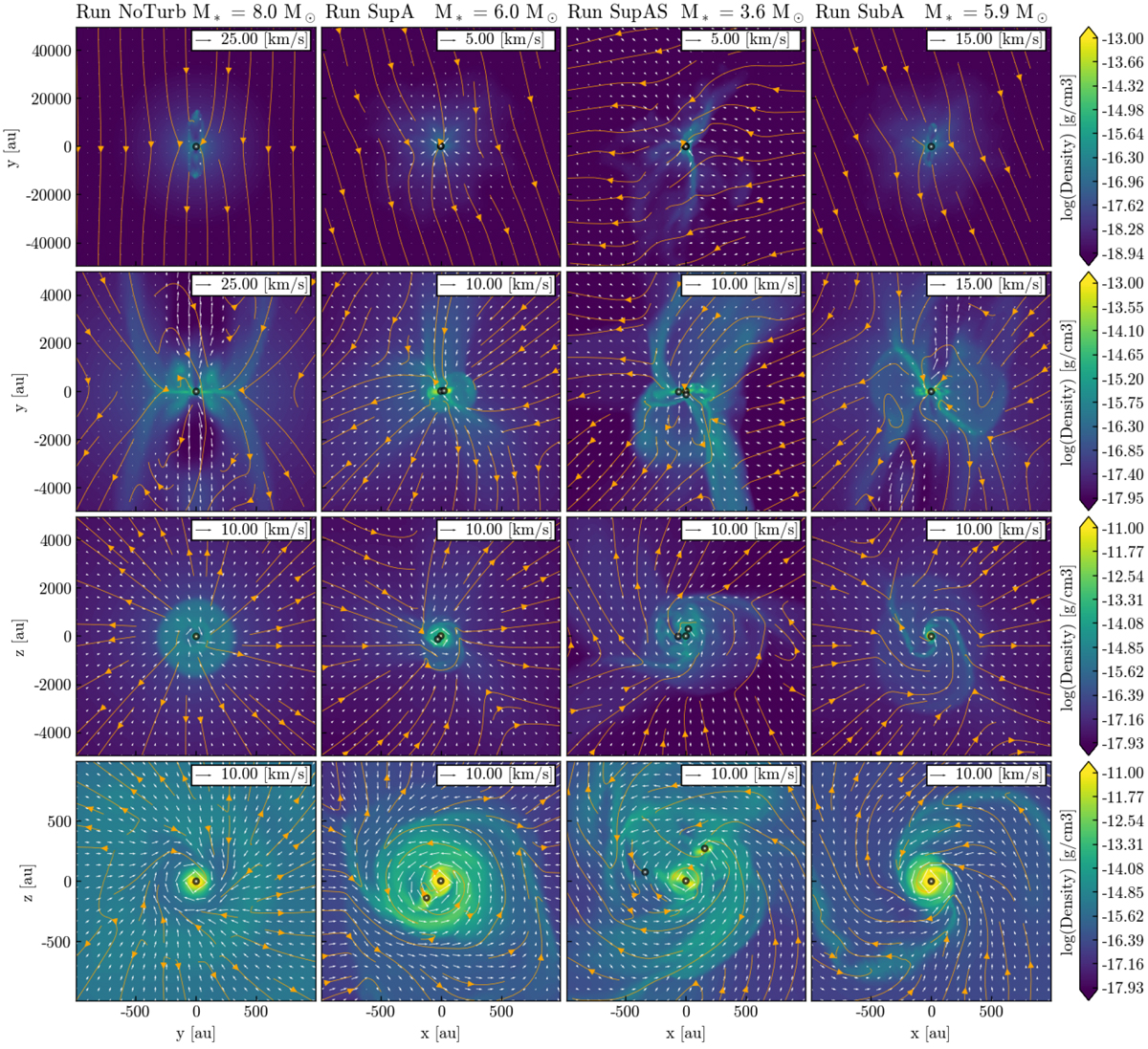