Possible single-armed spiral in the protoplanetary disk around HD 34282

Context. During the evolution of protoplanetary disks into planetary systems we expect to detect signatures that trace mechanisms such as planet-disk interaction. Protoplanetary disks display a large variety of structures in recently published high-spatial resolution images. However, the three-dimensional morphology of these disks is often difficult to infer from the two-dimensional projected images we observe.
Aims: We aim to detect signatures of planet-disk interaction by studying the scattering surface of the protoplanetary disk around HD 34282.
Methods: We spatially resolved the disk using the high-contrast imager VLT/SPHERE in polarimetric imaging mode. We retrieved a profile for the height of the scattering surface to create a height-corrected deprojection, which simulates a face-on orientation.
Results: The detected disk displays a complex scattering surface. An inner clearing or cavity extending up to r < 0."28 (88 au) is surrounded by a bright inclined (i = 56°) ring with a position angle of 119°. The center of this ring is offset from the star along the minor axis with 0."07, which can be explained with a disk height of 26 au above the midplane. Outside this ring, beyond its southeastern ansa we detect an azimuthal asymmetry or blob at r ~ 0."4. At larger separation, we detect an outer disk structure that can be fitted with an ellipse, which is compatible with a circular ring seen at r = 0."62 (=190 au) and a height of 77 au. After applying a height-corrected deprojection we see a circular ring centered on the star at 88 au; what had seemed to be a separate blob and outer ring could now both be part of a single-armed spiral.
Conclusions: We present the first scattered-light image of the disk around HD 34282 and resolve a disk with an inner cavity up to r ≈ 90 au and a highly structured scattering surface of an inclined disk at a large height Hscat∕r = 0."29 above the midplane at the inner edge of the outer disk. Based on the current data it is not possible to conclude decisively whether Hscat∕r remains constant or whether the surface is flared with at most Hscat ∝ r1.35, although we favor the constant ratio based on our deprojections. The height-corrected deprojection allows for a more detailed interpretation of the observed structures, from which we discern the first detection of a single-armed spiral in a protoplanetary disk. 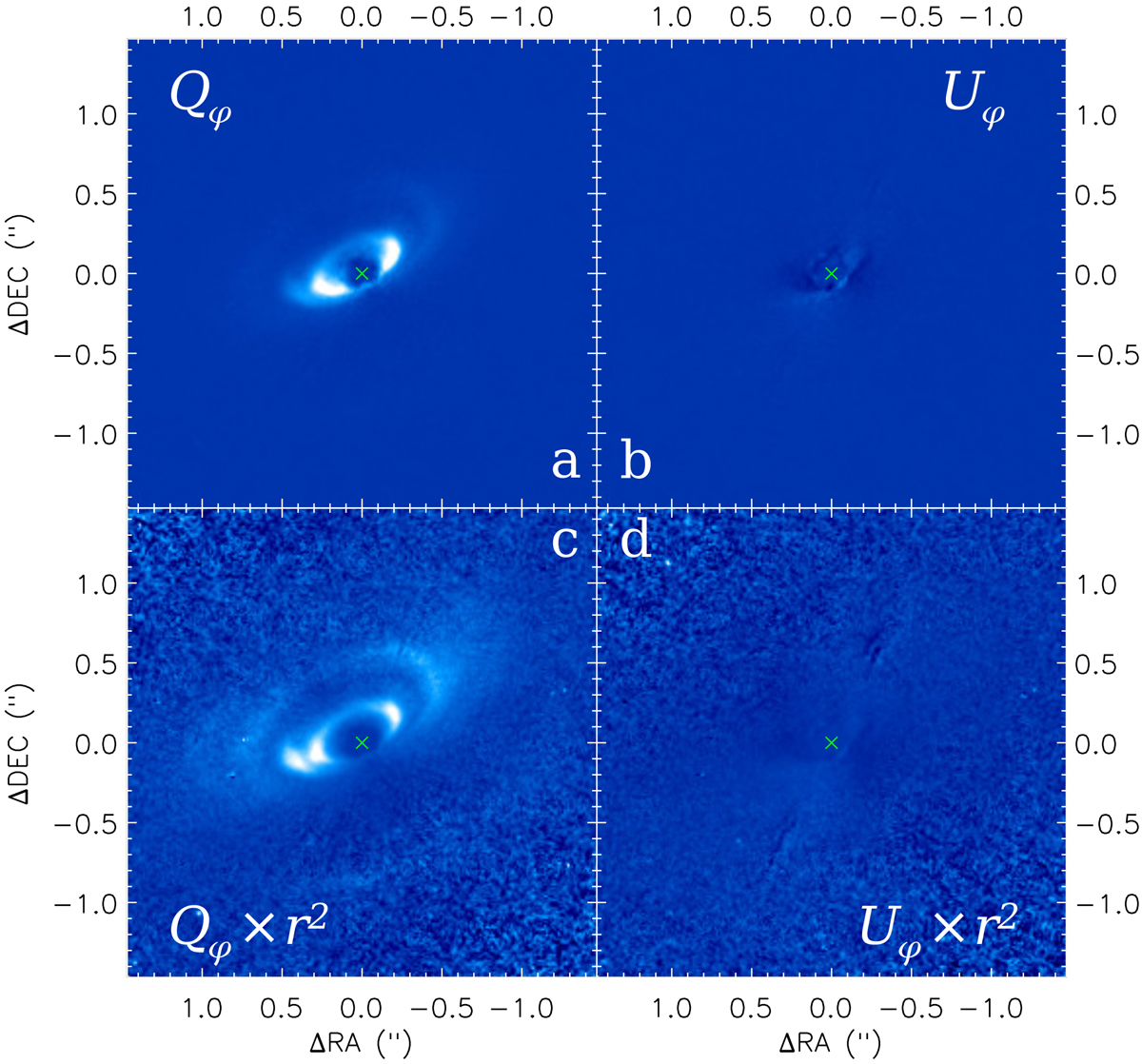