Context. Spectroscopic studies of Galactic O and B stars show that many stars with masses above 8 M⊙ have been observed in the Hertzsprung-Russell (HR) diagram just beyond the main-sequence (MS) band, as predicted by stellar models computed with a moderate overshooting. This may be an indication that the convective core sizes in stars in the upper part of the HR diagram are larger than predicted by these models.
Aims: Combining stellar evolution models and spectroscopic parameters derived for a large sample of Galactic O and B stars with the inclusion of brand-new information about their projected rotational velocities, we reexamine the question of the convective core size in MS massive stars.
Methods: We computed a grid of 120 different stellar evolutionary tracks with three initial rotations at solar metallicity (Z = 0.014), spanning a mass range from 7 to 25 M⊙, and combining different values for the initial rotation rate and overshooting parameter. For the rotating models, we considered two cases, one with a moderate and one with a strong angular momentum transport, the latter imposing a solid body rotation during most of the MS phase. We confront the results with two observed features: the position of the terminal age main sequence (TAMS) in the HR diagram and the decrease of the surface rotation when the surface gravity decreases at the end of the MS phase.
Results: We confirm that for stars more massive than about 8 M⊙, the convective core size at the end of the MS phase increases more rapidly with the mass than in models computed with a constant step overshoot chosen to reproduce the main sequence width in the low mass range (around 2 M⊙). This conclusion is valid for both the cases of non-rotating models and rotating models either with a moderate or a strong angular momentum transport. The increase of the convective core mass with the mass obtained from the TAMS position is, however, larger than the one deduced from the surface velocity drop for masses above about 15 M⊙. Although the observations that are available at present cannot determine the best choice between the core sizes given by the TAMS and the velocity drop, we discuss various methods of escaping this dilemma. At the moment, comparisons with eclipsing binaries seem to favor the solution given by the velocity drop.
Conclusions: While we confirm the need for larger convective cores at higher masses, we find tensions among different methods for stars more massive than 15 M⊙. The use of single-aged stellar populations (non-interacting binaries or stellar clusters) would be a great asset in resolving this tension. 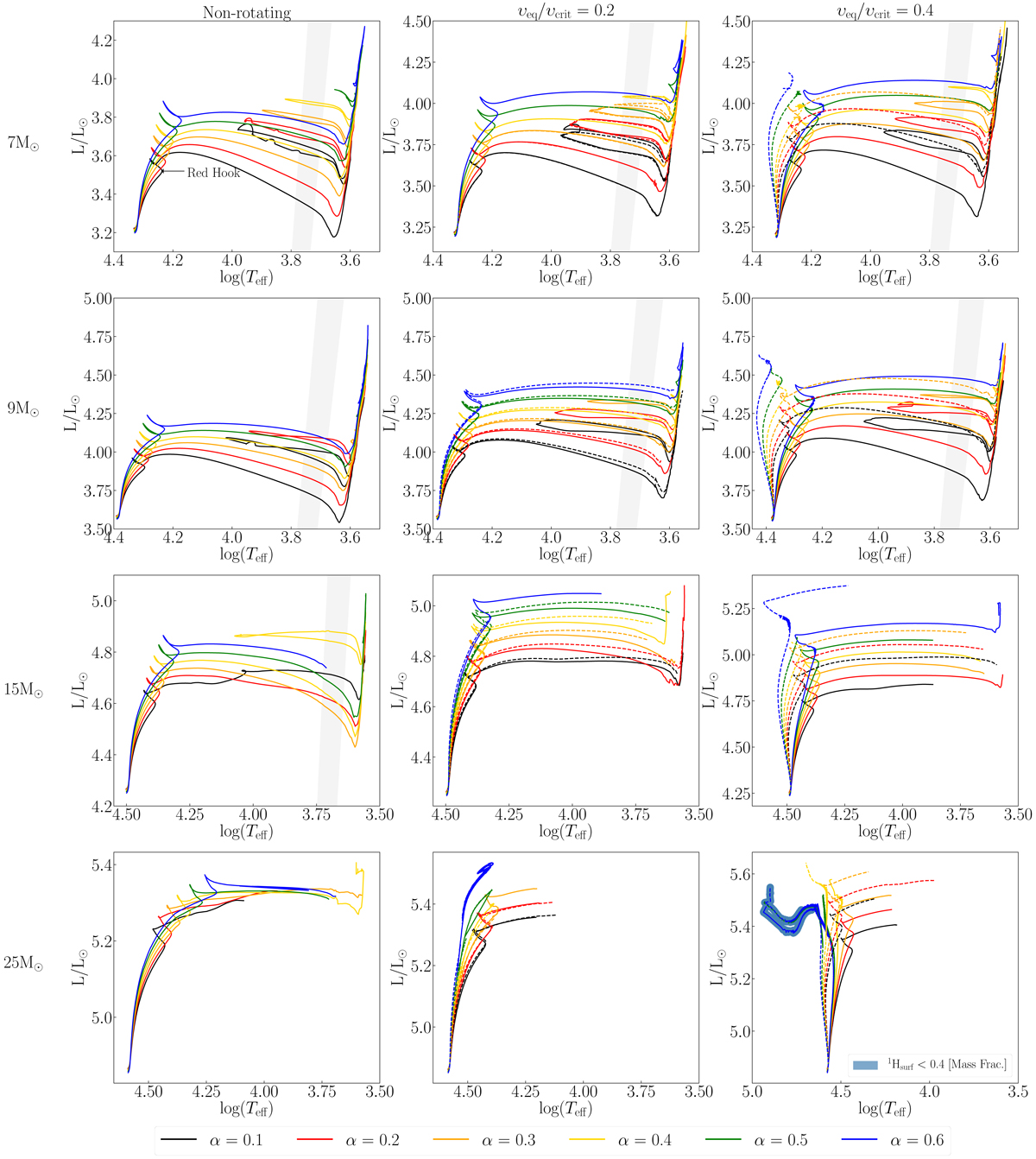