Context. The discovery of giant planets orbiting very low mass stars (VLMS) and the recent observed substructures in disks around VLMS is challenging planet formation models. Specifically, radial drift of dust particles is a catastrophic barrier in these disks, which prevents the formation of planetesimals and therefore planets.
Aims: We aim to estimate if structures, such as cavities, rings, and gaps, are common in disks around VLMS and to test models of structure formation in these disks. We also aim to compare the radial extent of the gas and dust emission in disks around VLMS, which can give us insight about radial drift.
Methods: We studied six disks around VLMS in the Taurus star-forming region using ALMA Band 7 (~340 GHz) at a resolution of ~0.1″. The targets were selected because of their high disk dust content in their stellar mass regime.
Results: Our observations resolve the disk dust continuum in all disks. In addition, we detect the 12CO (J = 3-2) emission line in all targets and 13CO (J = 3-2) in five of the six sources. The angular resolution allows the detection of dust substructures in three out of the six disks, which we studied by using UV-modeling. Central cavities are observed in the disks around stars MHO 6 (M 5.0) and CIDA 1 (M 4.5), while we have a tentative detection of a multi-ringed disk around J0433. We estimate that a planet mass of ~0.1 MJup or ~0.4 MSaturn is required for a single planet to create the first gap in J0433. For the cavities of MHO 6 and CIDA 1, a Saturn-mass planet (~0.3 MJup) is required. The other three disks with no observed structures are the most compact and faintest in our sample, with the radius enclosing 90% of the continuum emission varying between ~13 and 21 au. The emission of 12CO and 13CO is more extended than the dust continuum emission in all disks of our sample. When using the 12CO emission to determine the gas disk extension Rgas, the ratio of Rgas/Rdust in our sample varies from 2.3 to 6.0. One of the disks in our sample, CIDA 7, has the largest Rgas/Rdust ratio observed so far, which is consistent with models of radial drift being very efficient around VLMS in the absence of substructures.
Conclusions: Given our limited angular resolution, substructures were only directly detected in the most extended disks, which represent 50% of our sample, and there are hints of unresolved structured emission in one of the bright smooth sources. Our observations do not exclude giant planet formation on the substructures observed. A comparison of the size and luminosity of VLMS disks with their counterparts around higher mass stars shows that they follow a similar relation. 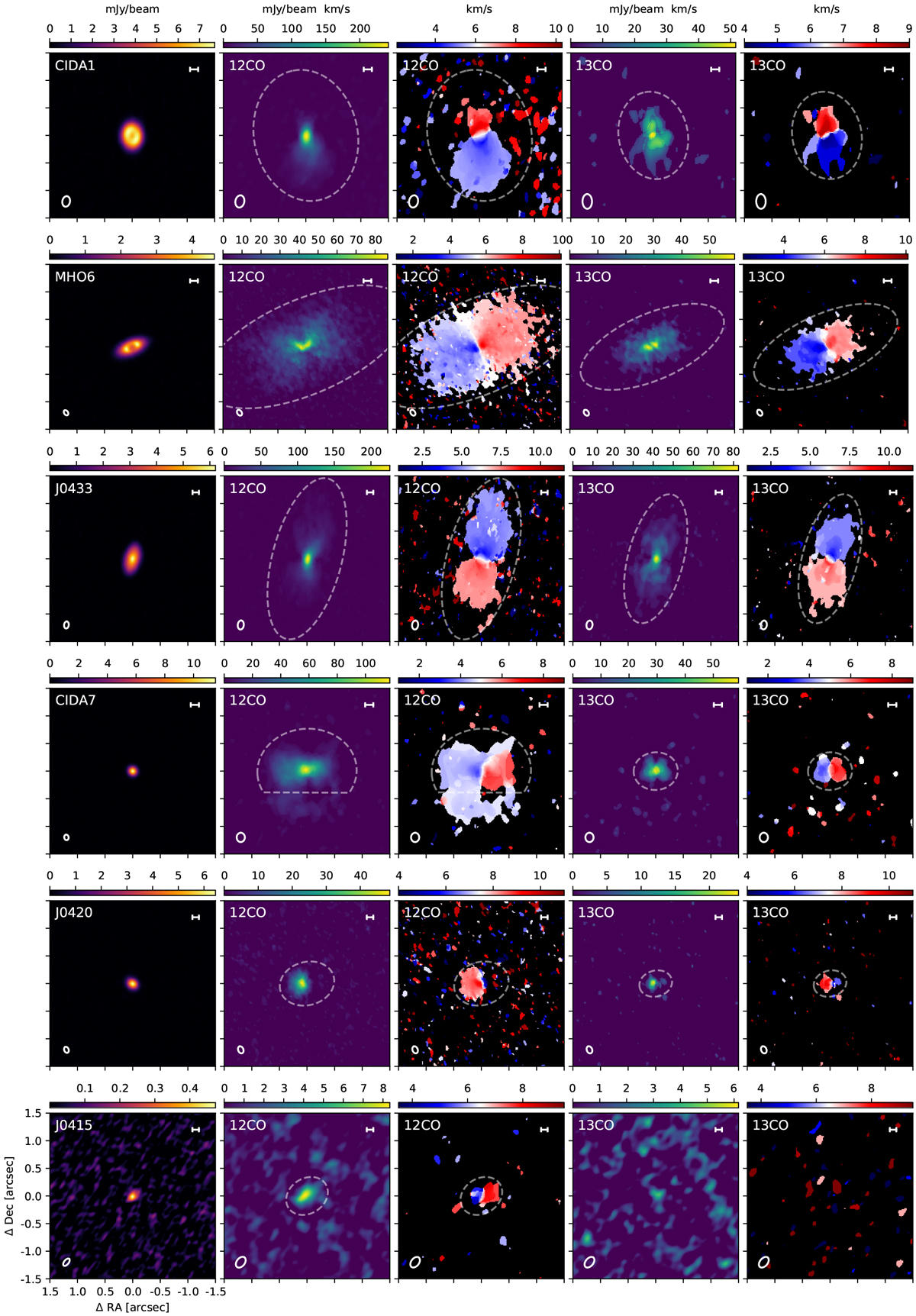