We present the results from the timing and spectral study of Mrk 421 based mainly on the Swift data in the X-ray energy range obtained during the time interval 2015 December-2018 April. The most extreme X-ray flaring activity on long-term, daily, and intraday timescales was observed during the 2 month period that started in 2017 December, when the 0.3-10 keV flux exceeded a level of 5 × 10-9 erg cm-2 s-1, recorded only twice previously. While the TeV-band and X-ray variabilities were mostly correlated, the source often varied in a complex manner in the MeV-GeV and radio-UV energy ranges, indicating that the multifrequency emission of Mrk 421 could not always be generated in a single zone. The longer-term flares at X-rays and γ-rays showed a lognormal character, possibly indicating a variability imprint of the accretion disk onto the jet. A vast majority of the 0.3-10 keV spectra were consistent with the log-parabolic model, showing relatively low spectral curvature and correlations between the different spectral parameters, predicted in the case of the first- and second-order Fermi processes. The position of the synchrotron spectral energy distribution peak showed an extreme variability on diverse timescales between the energies Ep < 0.1 and >15 keV, with 15% of the spectra peaking at the hard X-ray, and was related to the peak height as Sp∝ Epα with α ∼ 0.6, which is expected for the transition from Kraichnan-type turbulence into the "hard sphere" one. The 0.3-300 GeV spectra showed features of the hadronic contribution, jet-star interaction, and upscatter in the Klein-Nishina regime in different time intervals. 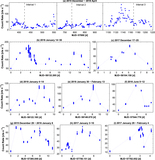