Massive Stars in the SDSS-IV/APOGEE2 Survey. III. New OB Stars in the Direction of the Sagittarius Spiral Arm

We have applied the semi-empirical spectral analysis, developed by the Sloan Digital Sky Survey (SDSS)-IV/Apache Point Observatory Galactic Evolution Experiment 2 (APOGEE2) Massive Star Team, to a large sample of new O- and B-type stars identified along the Sagittarius spiral arm, in the direction of the southern star clusters NGC3603 and NGC3576. We obtained H-band spectra for 265 point sources, using the APOGEE2-S spectrograph at the du Pont Telescope at the Las Campanas Observatory. We analyzed the associated spectral features deriving spectral types, as well as the massive star distribution along the line of sight. From a total of 265 science targets, 95 are classified as mid- to late-O-type stars (for which only 10 O-type stars are previously known in the literature), 38 are found to be early- to mid-B-type stars, and 32 are classified as either yellow or blue supergiants, completing a total of 165 massive stars. 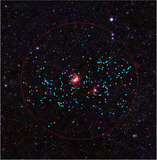