We present an analysis of Parker Solar Probe (PSP) IS☉IS observations of ∼30─300 keV n−1 ions on 2018 November 11 when PSP was about 0.25 au from the Sun. Five hours before the onset of a solar energetic particle (SEP) event, a coronal mass ejection (CME) was observed by STEREO-A/COR2, which crossed PSP about a day later. No shock was observed locally at PSP, but the CME may have driven a weak shock earlier. The SEP event was dispersive, with higher energy ions arriving before the lower energy ones. Timing suggests the particles originated at the CME when it was at ∼7.4R☉. SEP intensities increased gradually from their onset over a few hours, reaching a peak, and then decreased gradually before the CME arrived at PSP. The event was weak, having a very soft energy spectrum (−4 to −5 spectral index). The earliest arriving particles were anisotropic, moving outward from the Sun, but later, the distribution was observed to be more isotropic. We present numerical solutions of the Parker transport equation for the transport of 30─300 keV n−1 ions assuming a source comoving with the CME. Our model agrees well with the observations. The SEP event is consistent with ion acceleration at a weak shock driven briefly by the CME close to the Sun, which later dissipated before arriving at PSP, followed by the transport of ions in the interplanetary magnetic field. 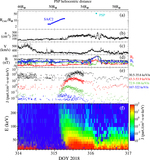