Large galaxies may contain an "atmosphere" of hot interstellar X-ray gas, and the temperature and radial density profile of this gas can be used to measure the total mass of the galaxy contained within a given radius r. We use this technique for 102 early-type galaxies with stellar masses M⋆ > 1010M⊙, to evaluate the mass fraction of dark matter (DM) within the fiducial radius r = 5re, denoted f5 = fDM(5re). On average, these systems have a median $\overline{{f}_{5}}\simeq 0.8\mbox{--}0.9$ with a typical galaxy-to-galaxy scatter ±0.15. Comparisons with mass estimates made through the alternative techniques of satellite dynamics (e.g., velocity distributions of globular clusters, planetary nebulae, satellite dwarfs) as well as strong lensing show encouraging consistency over the same range of stellar mass. We find that many of the disk galaxies (S0/SA0/SB0) have a significantly higher mean f5 than do the pure ellipticals, by Δf5 ≃ 0.1. We suggest that this higher level may be a consequence of sparse stellar haloes and quieter histories with fewer major episodes of feedback or mergers. Comparisons are made with the Magneticum Pathfinder suite of simulations for both normal and centrally dominant "Brightest Cluster" galaxies. Though the observed data exhibit somewhat larger scatter at a given galaxy mass than do the simulations, the mean level of DM mass fraction for all classes of galaxies is in good first-order agreement with the simulations. Finally, we find that the group galaxies with stellar masses near M⋆ ∼ 1011M⊙ have relatively more outliers at low f5 than in other mass ranges, possibly the result of especially effective AGN feedback in that mass range leading to expansion of their DM halos. 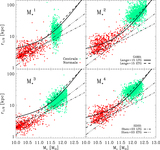