We examine the massive colliding cluster El Gordo, one of the most massive clusters at high redshift. We use a free-form lensing reconstruction method that avoids making assumptions about the mass distribution. We use data from the RELICS program and identify new multiply lensed system candidates. The new set of constraints and free-form method provide a new independent mass estimate of this intriguing colliding cluster. Our results are found to be consistent with earlier parametric models, indirectly confirming the assumptions made in earlier work. By fitting a double gNFW profile to the lens model and extrapolating to the virial radius, we infer a total mass for the cluster of ${M}_{200c}=({1.08}_{-0.12}^{+0.65})\times {10}^{15}$ M ${}_{\odot }$ . We estimate the uncertainty in the mass due to errors in the photometric redshifts and discuss the uncertainty in the inferred virial mass due to the extrapolation from the lens model. We also find in our lens map a mass overdensity corresponding to the large cometary tail of hot gas, reinforcing its interpretation as a large tidal feature predicted by hydrodynamical simulations that mimic El Gordo. Finally, we discuss the observed relation between the plasma and the mass map, finding that the peak in the projected mass map may be associated with a large concentration of colder gas exhibiting possible star formation. El Gordo is one of the first clusters that will be observed with JWST, which is expected to unveil new high-redshift lensed galaxies around this interesting cluster and provide a more accurate estimation of its mass. 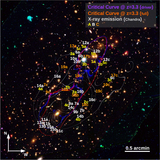