The mass function of dark matter halos is one of the most fundamental statistics in structure formation. Many theoretical models (such as Press-Schechter theory) are based on the notion that it could be universal, meaning independent of redshift and cosmology, when expressed in the appropriate variables. However, simulations exhibit persistent nonuniversalities in the mass functions of the virial mass and other commonly used spherical overdensity definitions. We systematically study the universality of mass functions over a wide range of mass definitions, for the first time including the recently proposed splashback mass, ${M}_{\mathrm{sp}}$ . We confirm that, in ΛCDM cosmologies, all mass definitions exhibit varying levels of nonuniversality that increase with peak height and reach between 20% and 500% at the highest masses we can test. ${M}_{\mathrm{vir}}$ , ${M}_{200{\rm{m}}}$ , and ${M}_{\mathrm{sp}}$ exhibit similar levels of nonuniversality. There are, however, two regimes where the splashback mass functions are significantly more universal. First, they are universal to 10% at $z\leqslant 2$ , whereas spherical overdensity definitions experience an evolution due to dark energy. Second, when additionally considering self-similar cosmologies with extreme power spectra, splashback mass functions are remarkably universal (to between 40% and 60%), whereas their spherical overdensity counterparts reach nonuniversalities between 180% and 450%. These results strongly support the notion that the splashback radius is a physically motivated definition of the halo boundary. We present a simple and universal fitting formula for splashback mass functions that accurately reproduces our simulation data. 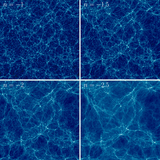