We explore the origin of a population of stars recently detected in the inner parsec of the Milky Way (MW) nuclear cluster, which exhibits subsolar metallicity and a higher rotation compared to the dominant population. Using state-of-the-art N-body simulations, we model the infall of massive stellar systems into the Galactic center, both of Galactic and extragalactic origin. We show that the newly discovered population can either be the remnant of a massive star cluster formed a few kiloparsecs away from the Galactic center (Galactic scenario) or be accreted from a dwarf galaxy originally located at 10-100 kpc (extragalactic scenario) and that reached the Galactic center 3-5 Gyr ago. A comparison between our models and characteristic Galactocentric distance and metallicity distributions of MW satellites and globular clusters favors the Galactic scenario. A comparison with clusters associated with the Enceladus-Sausage, Sequoia, Sagittarius, and Canis Major structures suggests that the progenitor of the observed metal-poor substructure formed in situ rather than being accreted. 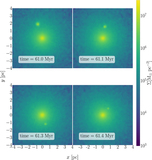