We have analyzed archival Very Long Baseline Array (VLBA) data for Cygnus A between 2002 and 2013, to search for radio emission from the transient discovered in 2015 by Perley et al. approximately 0"4 from the nucleus of Cygnus A (Cyg A-2). Perley et al. use Very Large Array and VLBA archival data (between 1989 and 1997) to show that the transient rises in flux density by a factor of at least 5 in less than approximately 20 yr. With the additional data presented here, we revise the rise time to between approximately 4 and 6 yr, based on a new detection of the source at 15.4 GHz from 2011 October. Our results strengthen the interpretation of Cyg A-2 as the result of a tidal disruption event (TDE), as we can identify the location of the compact object responsible for the TDE and can estimate the angular expansion speed of the resulting radio-emitting structures, equivalent to an apparent expansion speed of <0.9c. While our results are consistent with recent X-ray analyses, we can rule out a previously suggested date of early 2013 for the timing of the TDE. We favor a timing between early 2009 and late 2011. Applying the model of Nakar & Piran, we suggest a TDE causing a mildly relativistic outflow with a (density-dependent) total energy >1049 erg. Due to the improved temporal coverage of our archival measurements, we find that it is unlikely that Cyg A-2 has previously been in a high luminosity radio state over the last 30 yr. 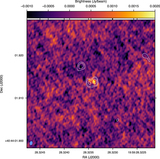