Circumbinary Disks: Accretion and Torque as a Function of Mass Ratio and Disk Viscosity

Using numerical hydrodynamics calculations and a novel method for densely sampling parameter space, we measure the accretion and torque on a binary system from a circumbinary disk. In agreement with some earlier studies, we find that the net torque on the binary is positive for mass ratios close to unity, and that accretion always drives the binary toward equal mass. Accretion variability depends sensitively on the numerical sink prescription, but the torque and relative accretion onto each component do not depend on the sink timescale. Positive torque and highly variable accretion occurs only for mass ratios greater than around 0.05. This means that for mass ratios below 0.05, the binary would migrate inward until the secondary accreted sufficient mass, after which it would execute a U-turn and migrate outward. We explore a range of viscosities, from α = 0.03 to α = 0.15, and find that this outward torque is proportional to the viscous torque, so that torque per unit accreted mass is independent of α. Dependence of accretion and torque on mass ratio is explored in detail, densely sampling mass ratios between 0.01 and unity. For mass ratio q > 0.2, accretion variability is found to exhibit a distinct sawtooth pattern, typically with a five-orbit cycle that provides a smoking gun prediction for variable quasars observed over long periods, as a potential means to confirm the presence of a binary. 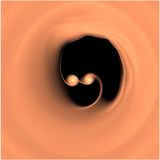