The Morphology-Density Relationship in 1 < z < 2 Clusters

The morphology-density relationship states that dense cosmic environments such as galaxy clusters have an overabundance of quiescent elliptical galaxies, but it is unclear at which redshift this relationship is first established. We study the morphology of four clusters with 1.2 < z < 1.8 using Hubble Space Telescope imaging and the morphology computation code STATMORPH. By comparing the median morphology of cluster galaxies to CANDELS field galaxies using Monte Carlo analysis, we find that two out of four clusters (at z = 1.19 and 1.75) have an established morphology-density relationship with more than 3σ significance. Approximately 50% of the galaxies in these clusters are bulge-dominated, compared to ∼30% in the field, and they are significantly more compact. This result is more significant for low-mass galaxies with $\mathrm{log}M/{M}_{\odot }\lessapprox 10.5$ , showing that low-mass galaxies are affected the most in clusters. We also find an intriguing system of two z ≍ 1.45 clusters at a unusually small 2D separation of 3' and 3D separation of ≍73 Mpc that exhibit no morphology-density relationship but have enhanced merger signatures. We conclude that the environmental mechanism responsible for the morphology-density relationship is (1) already active as early as z = 1.75; (2) forms compact, bulge-dominated galaxies; and (3) affects primarily low-mass galaxies. However, there is a significant degree of intracluster variance that may depend on the larger cosmological environment in which the cluster is embedded. 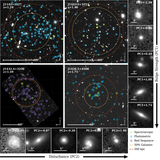