We present a study of ultra-diffuse galaxies (UDGs) in the Virgo Cluster based on deep imaging from the Next Generation Virgo Cluster Survey. Applying a new definition for the UDG class based on galaxy scaling relations, we define samples of 44 and 26 UDGs using expansive and restrictive selection criteria, respectively. Our UDG sample includes objects that are significantly fainter than previously known UDGs: i.e., more than half are fainter than $\langle \mu {\rangle }_{e}\sim 27.5$ mag arcsec-2. The UDGs in Virgo's core region show some evidence for being structurally distinct from "normal" dwarf galaxies, but this separation disappears when considering the full sample of galaxies throughout the cluster. UDGs are more centrally concentrated in their spatial distribution than other Virgo galaxies of similar luminosity, while their morphologies demonstrate that at least some UDGs owe their diffuse nature to physical processes—such as tidal interactions or low-mass mergers—that are at play within the cluster environment. The globular cluster (GC) systems of Virgo UDGs have a wide range in specific frequency (SN), with a higher mean SN than "normal" Virgo dwarfs, but a lower mean SN than Coma UDGs at fixed luminosity. Their GCs are predominantly blue, with a small contribution from red clusters in the more massive UDGs. The combined GC luminosity function is consistent with those observed in dwarf galaxies, showing no evidence of being anomalously luminous. The diversity in their morphologies and their GC properties suggests no single process has given rise to all objects within the UDG class. Based on the available evidence, we conclude that UDGs are simply those systems that occupy the extended tails of the galaxy size and surface brightness distributions. 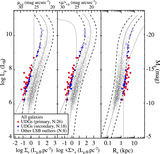