We provide a coherent, uniform measurement of the evolution of the logarithmic star formation rate (SFR)-stellar mass (M*) relation, called the main sequence (MS) of star-forming galaxies , for star-forming and all galaxies out to $z\sim 5$ . We measure the MS using mean stacks of 3 GHz radio-continuum images to derive average SFRs for ∼ 200,000 mass-selected galaxies at z > 0.3 in the COSMOS field. We describe the MS relation by adopting a new model that incorporates a linear relation at low stellar mass (log(M*/M⊙) < 10) and a flattening at high stellar mass that becomes more prominent at low redshift (z < 1.5). We find that the SFR density peaks at 1.5 < z < 2, and at each epoch there is a characteristic stellar mass (M* = 1-4 × 1010M⊙) that contributes the most to the overall SFR density. This characteristic mass increases with redshift, at least to z ∼ 2.5. We find no significant evidence for variations in the MS relation for galaxies in different environments traced by the galaxy number density at 0.3 < z < 3, nor for galaxies in X-ray groups at z ∼ 0.75. We confirm that massive bulge-dominated galaxies have lower SFRs than disk-dominated galaxies at a fixed stellar mass at z < 1.2. As a consequence, the increase in bulge-dominated galaxies in the local star-forming population leads to a flattening of the MS at high stellar masses. This indicates that "mass quenching" is linked with changes in the morphological composition of galaxies at a fixed stellar mass. 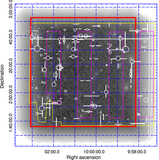