The 100 pc White Dwarf Sample in the SDSS Footprint

We present follow-up spectroscopy of 711 white dwarfs within 100 pc, and we present a detailed model atmosphere analysis of the 100 pc white dwarf sample in the Sloan Digital Sky Survey footprint. Our spectroscopic follow-up is complete for 83% of the white dwarfs hotter than 6000 K, where the atmospheric composition can be constrained reliably. We identify 1508 DA white dwarfs with pure hydrogen atmospheres. The DA mass distribution has an extremely narrow peak at 0.59 M⊙ and reveals a shoulder from relatively massive white dwarfs with M = 0.7-0.9 M⊙. Comparing this distribution with binary population synthesis models, we find that the contribution from single stars that form through mergers cannot explain the overabundance of massive white dwarfs. In addition, the mass distribution of cool DAs shows a near absence of M > 1 M⊙ white dwarfs. The pile-up of 0.7-0.9 M⊙ and the disappearance of M > 1 M⊙ white dwarfs is consistent with the effects of core crystallization. Even though the evolutionary models predict the location of the pile-up correctly, the delay from the latent heat of crystallization by itself is insufficient to create a significant pile-up, and additional cooling delays from related effects like phase separation are necessary. We also discuss the population of infrared-faint (ultracool) white dwarfs and demonstrate for the first time the existence of a well-defined sequence in color and magnitude. Curiously, this sequence is connected to a region in the color-magnitude diagrams where the number of white dwarfs with a helium-dominated atmosphere is low. This suggests that the infrared-faint white dwarfs likely have mixed H/He atmospheres. 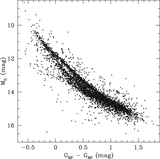