Extensive surveys with the Hubble Space Telescope over the past decade, targeting some of the most massive clusters in the sky, have uncovered dozens of galaxy cluster strong lenses. The massive cluster strong-lens scale is typically θE ∼ 10″ to ∼30″-35″, with only a handful of clusters known with Einstein radii θE ∼ 40″ or above (for zsource = 2, nominally). Here we report another very large cluster lens, RXC J0032.1+1808 (z = 0.3956), the second-richest cluster in the redMapper cluster catalog and the 85th most massive cluster in the Planck Sunyaev-Zel'dovich catalog. With our light-traces-mass and fully parametric approaches, we construct strong-lensing models based on 18 multiple images of five background galaxies newly identified in the Hubble data, mainly from the Reionization Lensing Cluster Survey (RELICS), in addition to a known sextuply imaged system in this cluster. Furthermore, we compare these models to Lenstool and GLAFIC models that were produced independently as part of the RELICS program. All models reveal a large effective Einstein radius of θE ≃ 40″ (zsource = 2), owing to the obvious concentration of substructures near the cluster center. Although RXC J0032.1+1808 has a very large critical area and high lensing strength, only three magnified high-redshift candidates are found within the field targeted by RELICS. Nevertheless, we expect many more high-redshift candidates will be seen in wider and deeper observations with Hubble or the James Webb Space Telescope. Finally, the comparison between several algorithms demonstrates that the total error budget is largely dominated by systematic uncertainties. 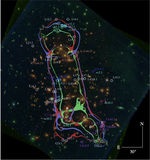