A crucial diagnostic that can tell us about processes involved in the formation and dynamical evolution of planetary systems is the angle between the rotation axis of a star and a planet's orbital angular momentum vector ("spin-orbit" alignment or "obliquity"). Here we present the first spin-orbit alignment measurement for a wide-separation exoplanetary system, namely on the directly imaged planet β Pictoris b. We use VLTI/GRAVITY spectro-interferometry with an astrometric accuracy of 1 μas (microarcsecond) in the Brγ photospheric absorption line to measure the photocenter displacement associated with the stellar rotation. Taking inclination constraints from astroseismology into account, we constrain the three-dimensional orientation of the stellar spin axis and find that β Pic b orbits its host star on a prograde orbit. The angular momentum vectors of the stellar photosphere, the planet, and the outer debris disk are well aligned with mutual inclinations ≤3° ± 5°, which indicates that β Pic b formed in a system without significant primordial misalignments. Our results demonstrate the potential of infrared interferometry to measure the spin-orbit alignment for wide-separation planetary systems, probing a highly complementary regime to the parameter space accessible with the Rossiter-McLaughlin effect. If the low obliquity is confirmed by measurements on a larger sample of wide-separation planets, it would lend support to theories that explain the obliquity in Hot Jupiter systems with dynamical scattering and the Kozai-Lidov mechanism. 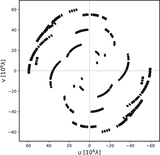