The Dragonfly Edge-on Galaxies Survey: Shaping the Outer disk of NGC 4565 via Accretion

We present deep g- and r-band imaging of the well-known edge-on galaxy NGC 4565 (the "Needle Galaxy"), observed as part of the Dragonfly Edge-on Galaxies Survey. The 3σ local surface brightness contrast limit on 10″ scales is 28.616 ± 0.005 mag arcsec-2 for the r-band image and 28.936 ± 0.005 mag arcsec-2 for the g-band image. We trace the galaxy's starlight in narrow slice profiles spanning over 90 kpc along the major axis (with bin sizes ranging from 1.7 × 0.5 to 1.7 × 7.8 kpc) to surface brightnesses below 29 mag arcsec-2. We confirm the previously observed asymmetric disk truncation in NGC 4565. In addition, the sharp northwest truncation turns over to a shallower component that coincides with a fan-like feature seen to wrap around the northwest disk limb. We propose that the fan may be a tidal ribbon and qualitatively replicate the fan with simple simulations, although alternative explanations of the fan and the disk's asymmetry are shown to be possible. In any case, we conclude that there is strong evidence for accretion-based outer disk growth in NGC 4565. 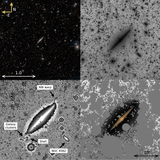