We present a three-dimensional kinematic reconstruction of the optically emitting, oxygen-rich ejecta of supernova remnant N132D in the Large Magellanic Cloud (LMC). Data were obtained with the 6.5 m Magellan telescope in combination with the IMACS+GISMO instrument and survey [O III] λλ4959, 5007 line emission in a ∼3' × 3' region centered on N132D. The spatial and spectral resolutions of our data enable detailed examination of the optical ejecta structure. The majority of N132D's optically bright oxygen ejecta are arranged in a torus-like geometry tilted approximately 28° with respect to the plane of the sky. The torus has a radius of 4.4 pc (DLMC/50 kpc), exhibits a blueshifted radial velocity asymmetry of -3000 to +2300 km s-1, and has a conspicuous break in its circumference. Assuming homologous expansion from the geometric center of O-rich filaments, the average expansion velocity of 1745 km s-1 translates to an age since explosion of 2450 ± 195 yr. A faint, spatially separated "runaway knot" (RK) with total space velocity of 3650 km s-1 is nearly perpendicular to the torus plane and coincident with X-ray emission that is substantially enhanced in Si relative to the LMC and N132D's bulk ejecta. These kinematic and chemical signatures suggest that the RK may have had its origin deep within the progenitor star. Overall, the main-shell morphology and high-velocity, Si-enriched components of N132D have remarkable similarity with those of Cassiopeia A, which was the result of a Type IIb supernova explosion. Our results underscore the need for further observations and simulations that can robustly reconcile whether the observed morphology is dominated by explosion dynamics or shaped by interaction with the environment. 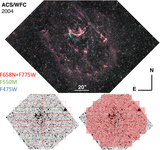