TESS Spots a Hot Jupiter with an Inner Transiting Neptune

Hot Jupiters are rarely accompanied by other planets within a factor of a few in orbital distance. Previously, only two such systems have been found. Here, we report the discovery of a third system using data from the Transiting Exoplanet Survey Satellite (TESS). The host star, TOI-1130, is an eleventh magnitude K-dwarf in Gaia G-band. It has two transiting planets: a Neptune-sized planet (3.65 ± 0.10 R\oplus) with a 4.1 days period, and a hot Jupiter (1.50-0.22+0.27 RJ) with an 8.4 days period. Precise radial-velocity observations show that the mass of the hot Jupiter is 0.974-0.044+0.043 MJ. For the inner Neptune, the data provide only an upper limit on the mass of 0.17 MJ (3σ). Nevertheless, we are confident that the inner planet is real, based on follow-up ground-based photometry and adaptive-optics imaging that rule out other plausible sources of the TESS transit signal. The unusual planetary architecture of and the brightness of the host star make TOI-1130 a good test case for planet formation theories, and an attractive target for future spectroscopic observations. 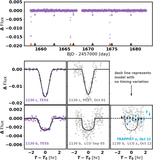