We apply a flexible parametric model, a combination of generalized Plummer profiles, to infer the shapes of the stellar density profiles of the Milky Way's satellite dwarf spheroidal galaxies (dSphs). We apply this model to 40 dSphs using star counts from the Sloan Digital Sky Survey, PanStarrs-1 Survey, Dark Energy Survey, and Dark Energy Camera Legacy Survey. Using mock data, we examine systematic errors associated with modeling assumptions and identify conditions under which our model can identify "non-standard" stellar density profiles that have central cusps and/or steepened outer slopes. Applying our model to real dwarf spheroidals, we do not find evidence for centrally cusped density profiles among the fifteen Milky Way satellites for which our tests with mock data indicate there would be sufficient detectability. We do detect steepened (with respect to a standard Plummer model) outer profiles in several dSphs—Fornax, Leo I, Leo II, and Reticulum II—which may point to distinct evolutionary pathways for these objects. However, the outer slope of the stellar density profile does not yet obviously correlate with other observed galaxy properties. 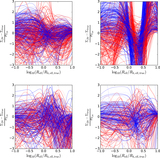