Super-Earths and mini-Neptunes exhibit great diversity in their compositional and orbital properties. Their bulk densities span a large range, from those dense enough to be purely rocky to those needing a substantial contribution from volatiles to their volumes. Their orbital configurations range from compact, circular multitransiting systems like Kepler-11 to systems like our solar system's terrestrial planets with wider spacings and modest but significant eccentricities and mutual inclinations. Here we investigate whether a continuum of formation conditions resulting from variation in the amount of solids available in the inner disk can account for the diversity of orbital and compositional properties observed for super-Earths, including the apparent dichotomy between single and multitransiting systems. We simulate in situ formation of super-Earths via giant impacts and compare to the observed Kepler sample. We find that intrinsic variations among disks in the amount of solids available for in situ formation can account for the orbital and compositional diversity observed among Kepler's transiting planets. Our simulations can account for the planets' distributions of orbital period ratios, transit duration ratios, and transit multiplicity; higher eccentricities for planets in single transiting systems than for those in multitransiting systems; smaller eccentricities for larger planets; scatter in the mass-radius relation, including lower densities for planets with masses measured with transit timing variations instead of with radial velocity; and similarities in planets' sizes and spacings within each system. Our findings support the theory that variation among super-Earth and mini-Neptune properties is primarily locked in by different in situ formation conditions, rather than arising stochastically through subsequent evolution. 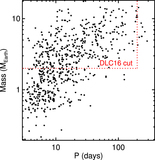