Discovery of a Giant Radio Fossil in the Ophiuchus Galaxy Cluster

The Ophiuchus galaxy cluster exhibits a curious concave gas density discontinuity at the edge of its cool core. It was discovered in the Chandra X-ray image by Werner and collaborators, who considered the possibility of it being a boundary of an active galactic nucleus (AGN)-inflated bubble located outside the core, but discounted this possibility because it required much too powerful an AGN outburst. Using low-frequency (72-240 MHz) radio data from the Murchison Widefield Array/GLEAM and the Giant Metrewave Radio Telescope, we found that the X-ray structure is, in fact, a giant cavity in the X-ray gas filled with diffuse radio emission with an extraordinarily steep radio spectrum. It thus appears to be a very aged fossil of the most powerful AGN outburst seen in any galaxy cluster (pV ∼ 5 × 1061 erg for this cavity). There is no apparent diametrically opposite counterpart either in X-ray or in the radio. It may have aged out of the observable radio band because of the cluster asymmetry. At present, the central AGN exhibits only a weak radio source, so it should have been much more powerful in the past to have produced such a bubble. The AGN is currently starved of accreting cool gas because the gas density peak is displaced by core sloshing. The sloshing itself could have been set off by this extraordinary explosion if it had occurred in an asymmetric gas core. This dinosaur may be an early example of a new class of sources to be uncovered by low-frequency surveys of galaxy clusters. 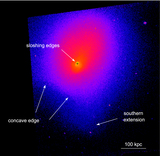