We report the results of our optical (VRI) photometric observations of the TeV blazar 1ES 0806+524 on 153 nights during 2011-2019 using seven optical telescopes in Europe and Asia. We investigated the variability of the blazar on intraday as well as on long-term timescales. We examined 18 intraday light curves for flux and color variations using the most reliable power-enhanced F-test and the nested ANOVA test. Only on one night was a small, but significant, variation found, in both V-band and R-band light curves. The V-R color index was constant on every one of those nights. Flux density changes of around 80% were seen over the course of these eight years in multiple bands. We found a weighted mean optical spectral index of 0.639 ± 0.002 during our monitoring period by fitting a power law ( ${F}_{\nu }\propto {\nu }^{-\alpha }$ ) in 23 optical (VRI) spectral energy distributions of 1ES 0806+524. We discuss different possible mechanisms responsible for blazar variability on diverse timescales. 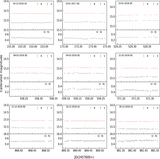