The internal dynamics of multiple stellar populations in globular clusters (GCs) provides unique constraints on the physical processes responsible for their formation. Specifically, the present-day kinematics of cluster stars, such as rotation and velocity dispersion, could be related to the initial configuration of the system. In recent work, we provided the first study of the kinematics of different stellar populations in NGC 0104 over a large field of view in the plane of the sky, exploiting Gaia Data Release 2 (DR2) proper motions combined with multi-band ground-based photometry. In this paper, we combine Gaia DR2 proper motions with Very Large Telescope radial velocities to investigate the kinematics along the line of sight and in the plane of the sky of multiple populations in seven GCs, namely NGC 0104, NGC 0288, NGC 5904, NGC 6121, NGC 6254, NGC 6752, and NGC 6838. Among the analyzed clusters, only NGC 0104 and NGC 5904 show significant rotation. Separating our sample into two groups of first- and second-population stars (1P and 2P) we find that overall these two populations exhibit a similar rotation pattern in NGC 0104. However, some hints of different rotation are observed in the external regions of this cluster. Interestingly, 1P and 2P stars in NGC 5904 show different rotation curves, with distinct phases and such differences are significant at the ∼2.5σ level. The analysis of the velocity-dispersion profiles of multiple populations confirms that 2P stars of NGC 0104 show stronger anisotropy than the 1P. 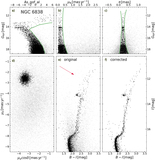