TOI 564 b and TOI 905 b: Grazing and Fully Transiting Hot Jupiters Discovered by TESS 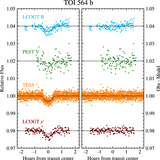