Stratospheric Observatory for Infrared Astronomy High-resolution Airborne Wideband Camera Plus polarimetry at 154 μm is reported for the face-on galaxy M51 and the edge-on galaxy NGC 891. For M51, the polarization vectors generally follow the spiral pattern defined by the molecular gas distribution, the far-infrared (FIR) intensity contours, and other tracers of star formation. The fractional polarization is much lower in the FIR-bright central regions than in the outer regions, and we rule out loss of grain alignment and variations in magnetic field strength as causes. When compared with existing synchrotron observations, which sample different regions with different weighting, we find the net position angles are strongly correlated, the fractional polarizations are moderately correlated, but the polarized intensities are uncorrelated. We argue that the low fractional polarization in the central regions must be due to significant numbers of highly turbulent segments across the beam and along lines of sight in the beam in the central 3 kpc of M51. For NGC 891, the FIR polarization vectors within an intensity contour of 1500 $\mathrm{MJy}\,{\mathrm{sr}}^{-1}$ are oriented very close to the plane of the galaxy. The FIR polarimetry is probably sampling the magnetic field geometry in NGC 891 much deeper into the disk than is possible with NIR polarimetry and radio synchrotron measurements. In some locations in NGC 891, the FIR polarization is very low, suggesting we are preferentially viewing the magnetic field mostly along the line of sight, down the length of embedded spiral arms. There is tentative evidence for a vertical field in the polarized emission off the plane of the disk. 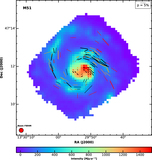