A Pluto-Charon Concerto: An Impact on Charon as the Origin of the Small Satellites

We consider a scenario where the small satellites of Pluto and Charon grew within a disk of debris from an impact between Charon and a trans-Neptunian object (TNO). After Charon's orbital motion boosts the debris into a disk-like structure, rapid orbital damping of meter-sized or smaller objects is essential to prevent the subsequent reaccretion or dynamical ejection by the binary. From analytical estimates and simulations of disk evolution, we estimate an impactor radius of 30-100 km; smaller (larger) radii apply to an oblique (direct) impact. Although collisions between large TNOs and Charon are unlikely today, they were relatively common within the first 0.1-1 Gyr of the solar system. Compared to models where the small satellites agglomerate in the debris left over by the giant impact that produced the Pluto-Charon binary planet, satellite formation from a later impact on Charon avoids the destabilizing resonances that sweep past the satellites during the early orbital expansion of the binary. 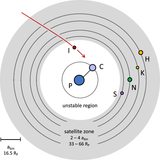