Faint and Fading Tails: The Fate of Stripped H I Gas in Virgo Cluster Galaxies

Although many galaxies in the Virgo cluster are known to have lost significant amounts of H I gas, only about a dozen features are known where the H I extends significantly outside its parent galaxy. Previous numerical simulations have predicted that H I removed by ram pressure stripping should have column densities far in excess of the sensitivity limits of observational surveys. We construct a simple model to try and quantify how many streams we might expect to detect. This accounts for the expected random orientation of the streams in position and velocity space as well as the expected stream length and mass of stripped H I. Using archival data from the Arecibo Galaxy Environment Survey, we search for any streams that might previously have been missed in earlier analyses. We report the confident detection of 10 streams as well as 16 other less-certain detections. We show that these well match our analytic predictions for which galaxies should be actively losing gas; however, the mass of the streams is typically far below the amount of missing H I in their parent galaxies, implying that a phase change and/or dispersal renders the gas undetectable. By estimating the orbital timescales, we estimate that dissolution rates of 1-10 M ${}_{\odot } yr-1 are able to explain both the presence of a few long, massive streams and the greater number of shorter, less-massive features. 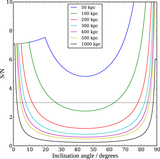