Future space telescopes may be able to directly image between approximately 10 and 100 planets with sizes and orbits consistent with habitable surface conditions (“exo-Earth candidates” or EECs), but observers will face difficulty in distinguishing these from the potentially hundreds of nonhabitable “false positives” which will also be detected. To maximize the efficiency of follow-up observations, a prioritization scheme must be developed to determine which planets are most likely to be EECs. In this paper, we present a Bayesian method for estimating the likelihood that any directly imaged extrasolar planet is a true EEC by interpreting the planet’s apparent magnitude and separation in the context of existing exoplanet statistics. As a specific application of this general framework, we use published estimates of the discovery yield of future space-based direct-imaging mission concepts to conduct “mock surveys” in which we compute the likelihood that each detected planet is an EEC. We find that it will be difficult to determine which planets are EECs with >50% confidence using single-band photometry immediately upon their detection. The best way to reduce this ambiguity would be to constrain the orbit of a given planet by revisiting the system multiple times or through a radial velocity precursor survey. Astrometric or radial velocity constraints on the mass of the planet would offer a lesser benefit. Finally, we show that a Bayesian approach to prioritizing targets would improve the follow-up efficiency of a direct imaging survey versus a blind approach using the same data. For example, the prioritized approach could reduce the amount of integration time required for the spectral detection (or rejection) of water absorption in most EECs by a factor of two. 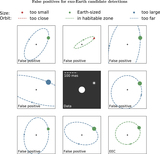