Context. Magnetic fields are predicted to play a significant role in the formation of filamentary structures and their fragmentation to form stars and star clusters.
Aims: We aim to investigate the role of the magnetic field in the process of core fragmentation toward the two hub-filament systems in the infrared dark cloud G14.225-0.506, which present different levels of fragmentation.
Methods: We performed observations of the thermal dust polarization at 350 μm using the Caltech Submillimeter Observatory (CSO) with an angular resolution of 10″ toward the two hubs (Hub-N and Hub-S) in the infrared dark cloud G14.225-0.506. We additionally applied the polarization-intensity-gradient method to estimate the significance of the magnetic field over the gravitational force.
Results: The sky-projected magnetic field in Hub-N shows a rather uniform structure along the east-west orientation, which is roughly perpendicular to the major axis of the hub-filament system. The intensity gradient in Hub-N displays a single local minimum coinciding with the dust core MM1a detected with interferometric observations. Such a prevailing magnetic field orientation is slightly perturbed when approaching the dust core. Unlike the northern Hub, Hub-S shows two local minima, reflecting the bimodal distribution of the magnetic field. In Hub-N, both east and west of the hub-filament system, the intensity gradient and the magnetic field are parallel whereas they tend to be perpendicular when penetrating the dense filaments and hub. Analysis of the |δ|- and ΣB-maps indicates that, in general, the magnetic field cannot prevent gravitational collapse, both east and west, suggesting that the magnetic field is initially dragged by the infalling motion and aligned with it, or is channeling material toward the central ridge from both sides. Values of ΣB ≳ 1 are found toward a north-south ridge encompassing the dust emission peak, indicating that in this region magnetic field dominates over gravity force, or that with the current angular resolution we cannot resolve a hypothetically more complex structure. We estimated the magnetic field strength, the mass-to-flux ratio, and the Alfvén Mach number, and found differences between the two hubs.
Conclusions: The different levels of fragmentation observed in these two hubs could arise from differences in the properties of the magnetic field rather than from differences in the intensity of the gravitational field because the density in the two hubs is similar. However, environmental effects could also play a role. 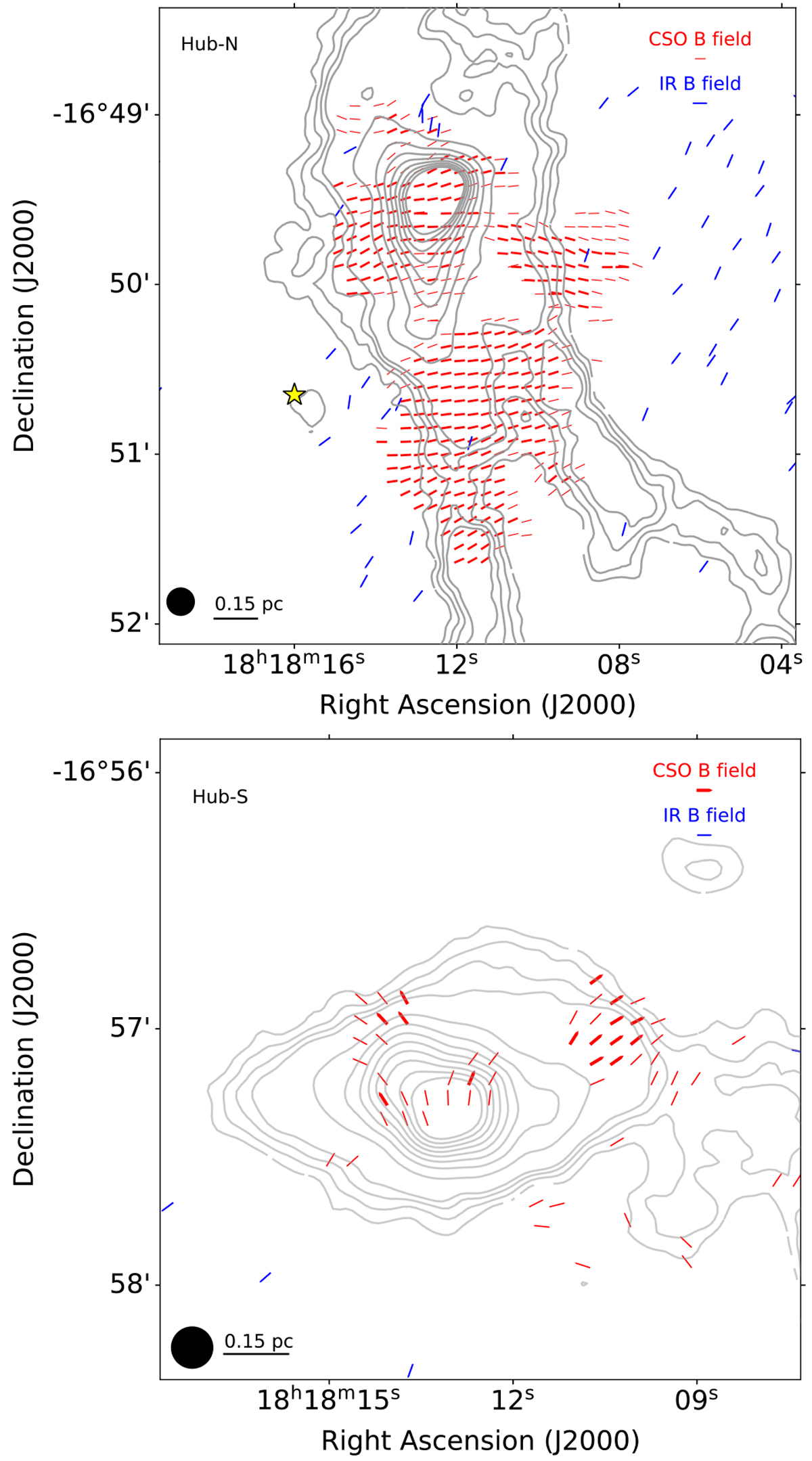