Context. Disk winds play a fundamental role in the evolution of protoplanetary systems. The complex structure and dynamics can be investigated through the emission of atomic and molecular lines detected in high-resolution optical/IR spectra of young stellar objects. Despite their great importance, however, studies connecting the atomic and molecular components are lacking so far.
Aims: In the framework of the GIARPS High-resolution Observations of T Tauri stars (GHOsT) project, we aim to characterize the atomic and molecular winds in a sample of classical T Tauri stars (CTTs) of the Taurus-Auriga region, focusing on a statistical analysis of the kinematic properties of the [O I] 630 nm and H2 2.12 μm lines and their mutual relationship.
Methods: We analyzed the flux calibrated [O I] 630 nm and H2 2.12 μm lines in a sample of 36 CTTs observed at the Telescopio Nazionale Galileo with the HARPS-N spectrograph (resolving power of R = 115 000) and with the GIANO spectrograph (R = 50 000). We decomposed the line profiles into different kinematic Gaussian components and focused on the most frequently detected component, the narrow low-velocity (vp < 20 km s-1) component (NLVC).
Results: We found that the H2 line is detected in 17 sources (~50% detection rate), and [O I] is detected in all sources but one. The NLV components of the H2 and [O I] emission are kinematically linked, with a strong correlation between the peak velocities and the full widths at half maximum of the two lines. Assuming that the line width is dominated by Keplerian broadening, we found that the [O I] NVLC originates from a disk region between 0.05 and 20 au and that of H2 in a region from 2 and 20 au. We also found that H2 is never detected in sources where [O I] originates in regions below 1 au, as well as in sources of early (~F-G) spectral type with a luminosity >1 L⊙. Moreover, in seven sources, both H2 and [O I] have clear blueshifted peaks and prominent [O I] high-velocity components. These components have also been detected in sources with no relevant centroid shift. Finally, we did not find any clear correlation between vp of the H2 and [O I] NVLC and the outer disk inclination. This result is in line with previous studies.
Conclusions: Our results suggest that molecular and neutral atomic emission in disk winds originate from regions that might overlap, and that the survival of molecular winds in disks strongly depends on the gas exposure to the radiation from the central star. The presence of jets does not necessarily affect the kinematics of the low-velocity winds. Our results demonstrate the potential of wide-band high-resolution spectroscopy in linking tracers of different manifestations of the same phenomenon. 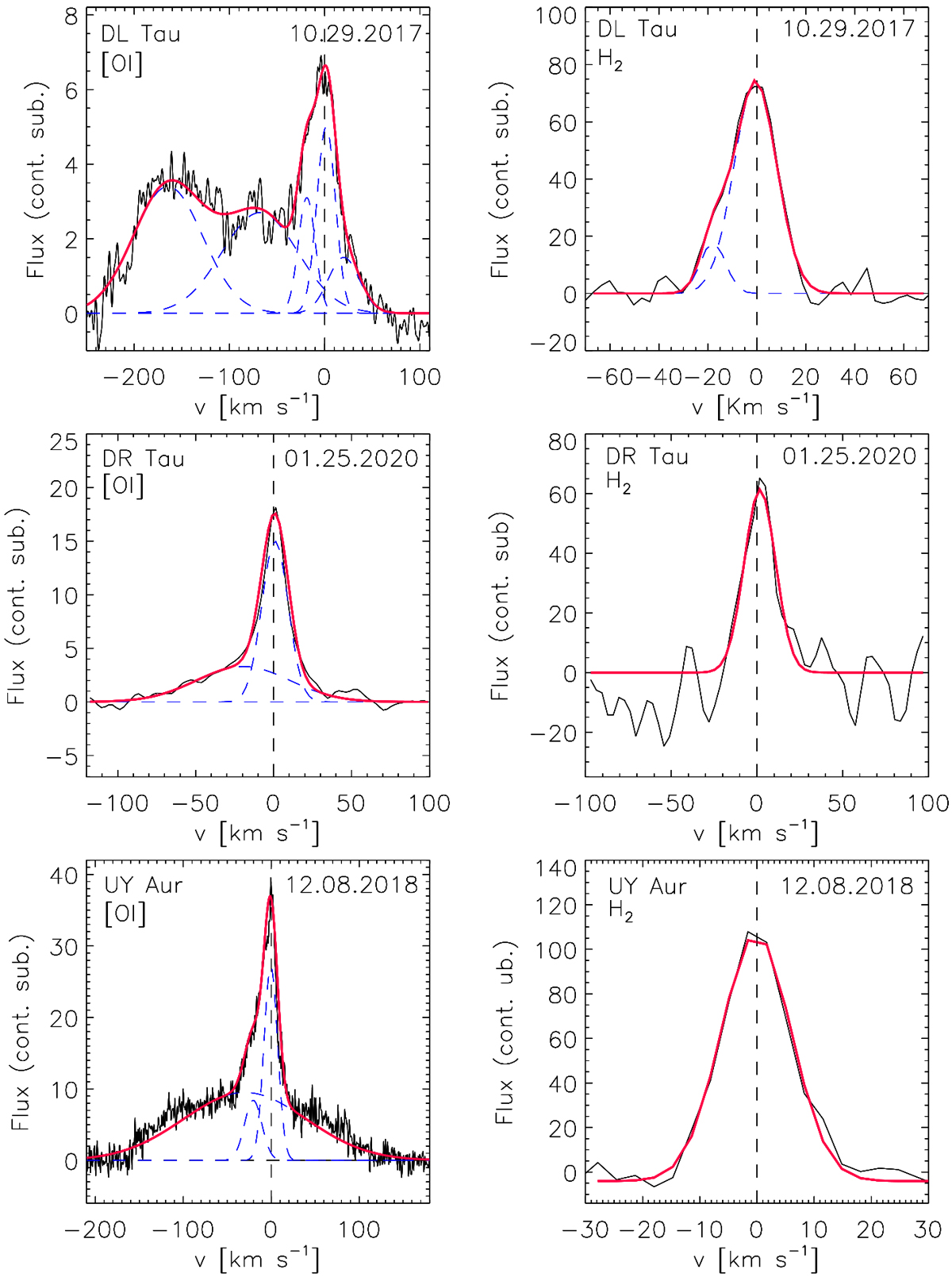