Aims: The response of a protoplanetary disk to luminosity bursts of various durations is studied with the purpose to determine the effect of the bursts on the strength and sustainability of gravitational instability in the disk. A special emphasis is paid to the spatial distribution of gas and grown dust (from 1 mm to a few centimetres) during and after the burst.
Methods: Numerical hydrodynamics simulations were employed to study the dynamics of gas and dust in the thin-disk limit. Dust-to-gas friction, including back reaction and dust growth, were also considered. Bursts of various durations (from 100 yr to 500 yr) were initiated in accordance with a thermally ignited magnetorotational instability. Luminosity curves for constant- and declining-magnitude bursts were adopted to represent two typical limiting cases for FU Orionis-type eruptions.
Results: The short-term effect of the burst is to reduce the strength of gravitational instability by heating and expanding the disk. The longest bursts with durations comparable to the revolution period of the spiral can completely dissolve the original two-armed spiral pattern in the gas disk by the end of the burst, while the shortest bursts only weaken the spiral pattern. The reaction of grown dust to the burst is somewhat different. The spiral-like initial distribution with deep cavities in the inter-armed regions transforms into a ring-like distribution with deep gaps. This transformation is mostly expressed for the longest-duration bursts. The long-term effect of the burst depends on the initial disk conditions at the onset of the burst. In some cases, vigorous disk fragmentation sets in several thousands of years after the burst, which was absent in the model without the burst. Several clumps with masses in the giant-planet mass range form in the outer disk regions. After the disk fragmentation phase, the spatial distribution of grown dust is characterized by multiple sharp rings located from tens to hundreds of astronomical units. The arrangement and sharpness of the rings depends on the strength of dust turbulent diffusion. The wide-orbit rings are likely formed as the result of dust-rich clump dispersal in the preceding gravitationally unstable phase.
Conclusions: Luminosity bursts similar in magnitude to FU Orionis-type eruptions can have a profound effect on the dynamics of gas and dust in protoplanetary disks if the burst duration is comparable to, or longer than, the dynamical timescales. In this context, the spatial morphology of the gas-dust disk of V883 Ori, a FU Orionis-like object that is thought to be in the outburst phase for more than a century with an unknown onset date, may be used as test case for the burst models considered in this work. The potential relation of the obtained ring structures to a variety of gaps and rings observed in T Tauri disks remains to be established. 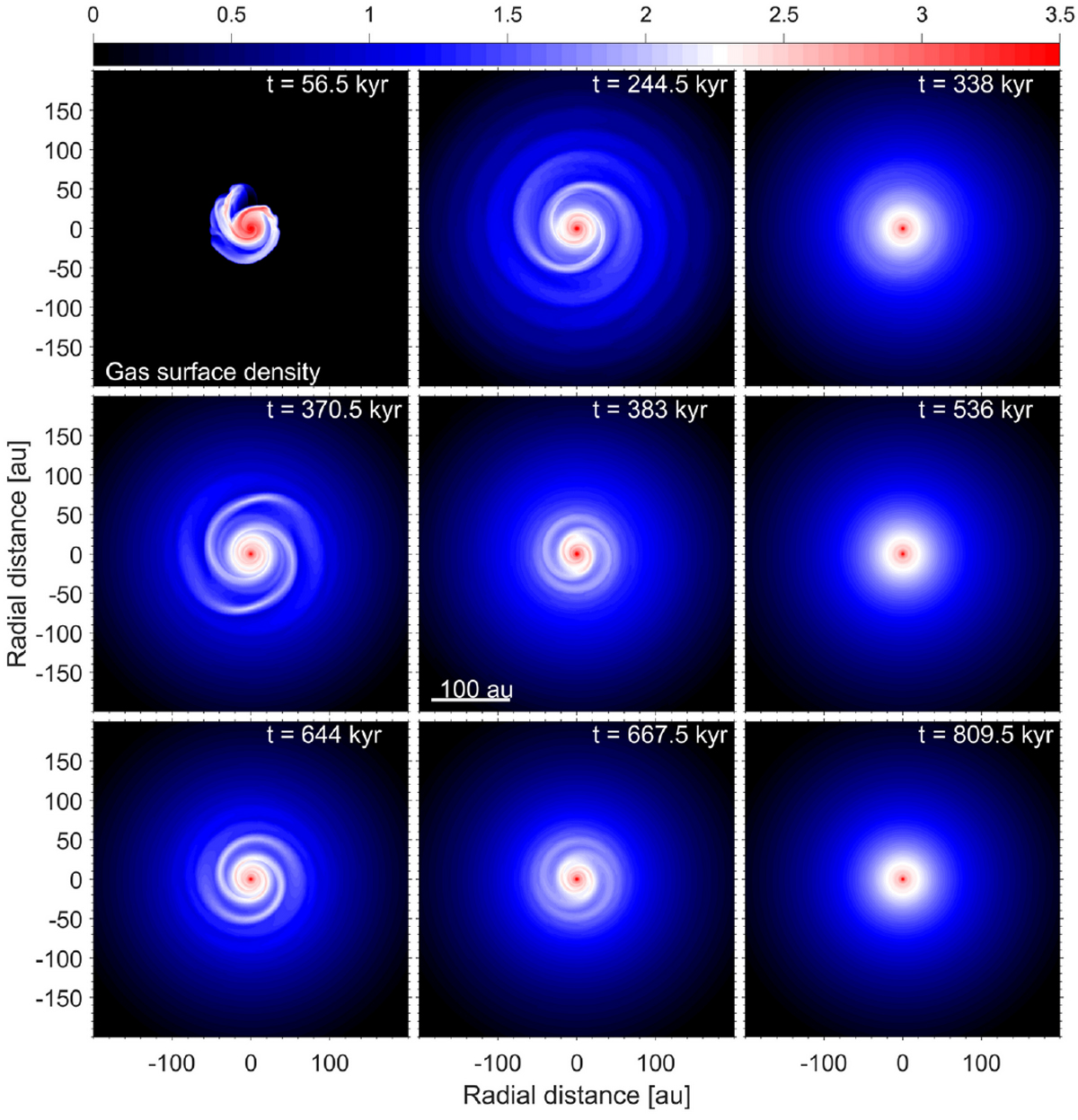